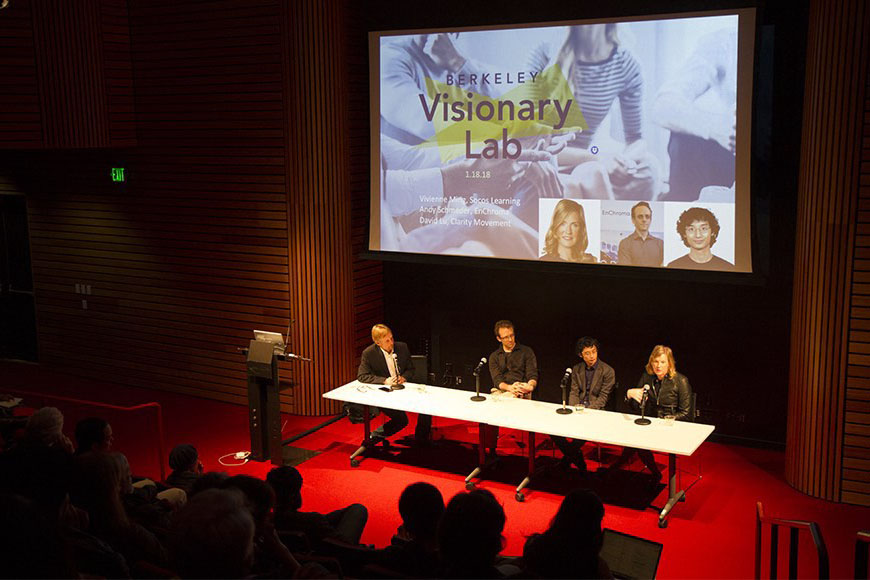 Originally published on the Daily Californian by Anjali Shrivastava.

Berkeley-based entrepreneurs Vivienne Ming, Andy Schmeder and David Lu discussed startup culture and the stories behind each of their innovations in a panel hosted by the Berkeley Chamber of Commerce, or BCC, on Thursday evening.

The event — called “Berkeley Visionary Lab: Innovation in Action” — was the first in a series of events hosted by BCC, the Berkeley Startup Cluster and the city of Berkeley’s Office of Economic Development. The event series is a spinoff of the chamber’s Berkeley Visionary Awards and is meant to facilitate connections between the city’s entrepreneurs, elected officials and other members of the Berkeley community.

“Berkeley really has a long history of really being an iconoclast and being at the cutting edge, making action and change happen,” said Mayor Jesse Arreguín as he introduced the event. “Whether that’s through research or activism, that’s really the ethos of Berkeley.”

Alejandro Cantú, who developed an earthquake warning system called SkyAlert and attended the panel, said the event was an opportunity to see projects developed by the Berkeley community. He added that the problems addressed by Berkeley’s innovation community are “unique,” and he feels that he is in the right place to grow his company.

Ming, who co-founded Socos with her wife Norma Ming, said during the event that “some of the most amazing innovations of the world” are discovered at UC Berkeley and that she wanted to “tap into that” by basing her company here.

Socos is an educational startup that uses machine learning to give teachers evaluations of their students’ academic progress. According to Ming, she has only ever taken one high-level math course and one programming course, but she has invented several algorithms and written papers on computer science and cognitive science.

“If you take entrepreneurs and give them financial training, it doesn’t change anything about their outcomes,” Ming said during the event. “But you give them resiliency training and how to deal with failure, it totally changes everything.”

Schmeder, who co-founded Enchroma, echoed Ming’s views on resilience. At the event, he said his company, which produces glasses that restore color vision for the colorblind, has been through “a number of near-bankruptcies.”

Lu, who came to UC Berkeley as an international student from Shanghai, China, said during the event he initially planned on earning a doctorate. But two years into his education, he co-founded Clarity Movement, a startup based at CITRIS Foundry that develops air-sensing technology to monitor and respond to air pollution.

Lu eventually received a bachelor’s degree in atmospheric science in 2016, and Schmeder, who also graduated from UC Berkeley, received a bachelor’s degree in mathematics in 2002. Ming, who did not complete her undergraduate degree, went to Carnegie Mellon University for her master’s and doctorate degrees and became a visiting scholar at UC Berkeley’s Redwood Center for Theoretical Neuroscience.

All three cited the university’s resources and the city of Berkeley’s personality as reasons for their individual successes. After discussing their experiences with their own startup companies, the floor was opened to the audience for questions, leading to the end of the event about 7:30 p.m.

“Berkeley’s my second home,” Lu said. “I came from China straight to Berkeley … so I assumed all of (the) U.S. was like this. And then I realized Berkeley is quite (a) unique and special place. I love this place. It’s a dream enabler.”

Clarity Movement Co. and the National Environmental Standards and Regulations Enforcement Agency (NESREA) of Nigeria announced today that they have entered into a letter of intent
Article