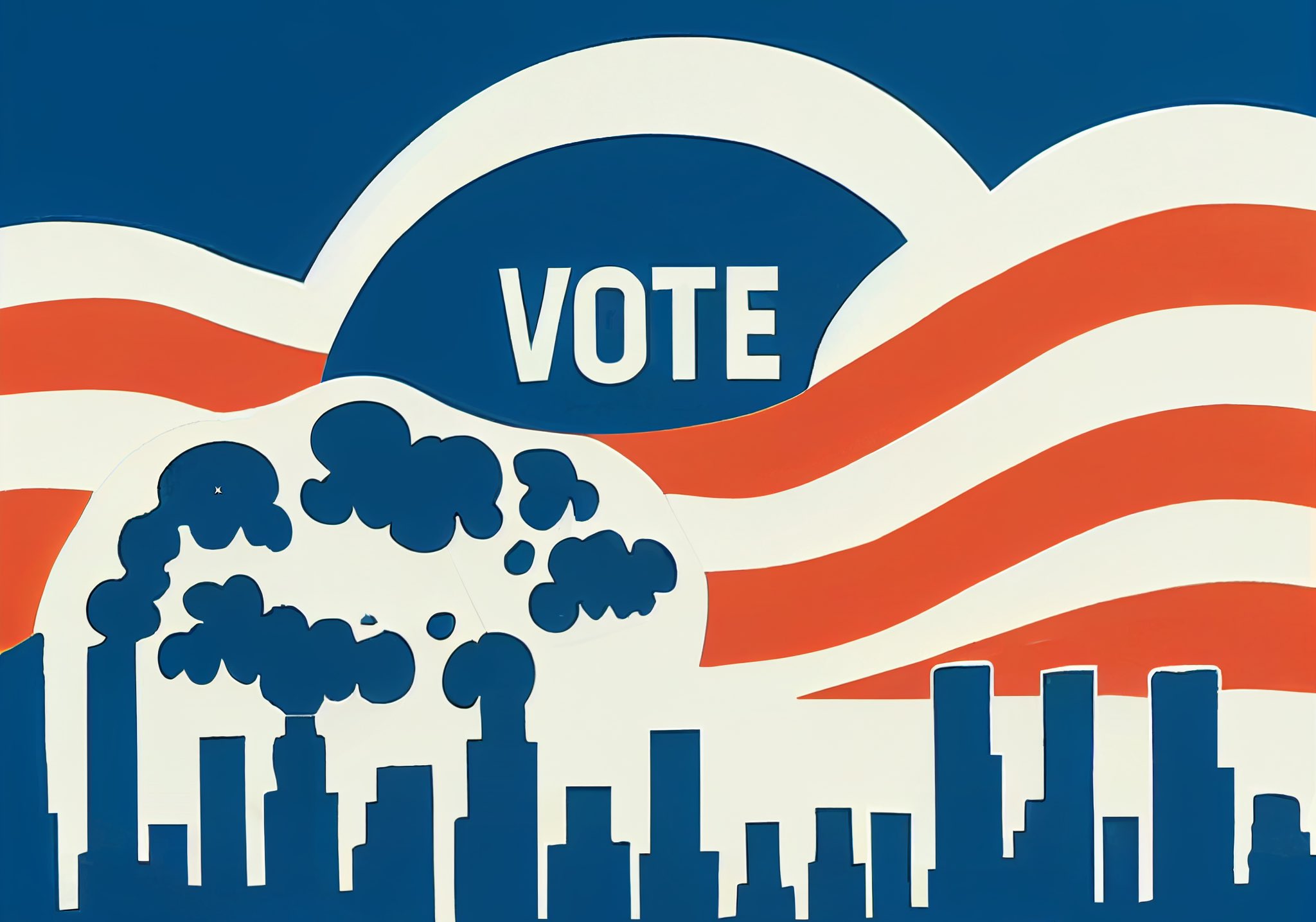 Environmental policies up for vote: How different states are looking to reduce air pollution and mitigate climate change in the upcoming midterm elections

TL;DR — As the 2022 midterm elections quickly approach in the United States, we are examining the different approaches that states are taking to address climate change and other environmental issues. With a variety of propositions and state and local positions up for vote, this election holds significant potential for crucial legislative change at various levels of government and can set the stage for further positive change toward climate change mitigation and air pollution reduction in the coming years.

The potential of the 2022 midterm elections

While it is key to pursue environmental change through all available avenues, legislation and policy change are major ways that significant action can be taken to work toward cleaner air and a healthier climate.

As we approach the 2022 Midterm Elections in the United States, we wanted to hone in on various policies and legislative changes that different states are putting on their ballots to work towards better environmental health.

This election comes amid a variety of recent environmental policy changes, setting the stage for an important election for those hoping to see the country take steps towards a healthier environment.

In the recent West Virginia v. EPA climate ruling, the Supreme Court ruled that the Clean Air Act restricts the USEPA from regulation that would cause a nationwide shift away from coal-sourced electricity. Following this ruling, the Inflation Reduction Act was introduced in order to assert that greenhouse gases, like carbon dioxide and methane, are indeed covered as air pollutants under the Clean Air Act, reinforcing the EPA’s authority to monitor them. This act, though not directly addressing the Supreme Court ruling, is intended to give future support to rulings regarding the EPA’s authority to regulate greenhouse gases as air pollutants.

According to a Washington Post-ABC News poll, half of voters state that climate change is an important issue in the midterm election.

Sixty-two percent of respondents to the Global Strategy Group poll commissioned by the political arms of the Environmental Defense Fund and the Natural Resources Defense Council say state lawmakers should ‘make reducing air pollution a priority,’ and an equal number believe the state needs more rules to protect the commonwealth’s air and water from oil and gas pollution.”

Recent polling results also show that Black and Hispanic Americans — who tend to be disproportionately impacted by the consequences of air pollution and climate change — are more likely to see climate change as an important factor in their voting decisions as opposed to white Americans.

Even the most optimistic economic modeling on the impacts of the Inflation Reduction Act estimates the law won’t get the country close to slashing climate emissions in half by 2030 (the bare minimum the US needs to do to keep global warming to under a disastrous 2 degrees Celsius) without a big boost from state and local governments. A recent paper by Energy Innovation, a climate modeling group, notes that states will be “central actors” in implementing the Inflation Reduction Act and determining how much emissions will fall.”

Keeping in mind the importance of state-level elections when it comes to climate change, let’s take a look at some of the state-level policies on the ballot.

In the state of California, Prop 30 is up for vote on this year’s ballot. The proposition seeks to increase funding for wildfire management and electric vehicle infrastructure by increasing the tax on those that make over $2 million a year by 1.75%.

According to a representative of Cal Fire, 20% of the proposed legislation would supply Cal Fire with funding for staffing, fire suppression, and fire prevention — an increasingly crucial need as accelerating climate change leads to more frequent and intense wildfires. Read our blog here to learn more about the link between climate change and wildfires and the long-term implications for health and the environment.

The remaining funding would support electric and hydrogen vehicle charging stations across the state, reducing the usage of traditional vehicles that make significant contributions to NO2 and PM2.5 pollution levels.

Proposition 1 in New York also seeks to increase funding for initiatives that would promote environmental health.

Also known as the Clean Water, Clean Air, and Green Jobs Environmental Bond Act of 2022, this legislation would fund the following environmental improvements:

Key races to determine the future of environmental policy

While most states do not have propositions for environmental legislation as significant as California or New York on their ballot, many have key electoral races happening this year that could determine future environmental policies and action in the state.

Oregon’s cap-and-trade program, Maryland’s net-zero emissions targets, and Arizona’s solar subsidies all hang in the balance in upcoming midterm elections, and their fate could have an effect on U.S. climate performance.”

Pennsylvania's battle between Republican Dr. Oz and Democrat lieutenant governor John Fetterman will have a major impact on the state’s stance on climate change — Fetterman is in favor of switching the state to sustainable energy as soon as feasible.

In Arizona, the electoral race for two open seats on the Arizona Corporation Commission (ACC) is making it a swing state — not in terms of Senate or House control, but in regards to whether Arizona will act as a leader in decarbonizing electricity, harnessing its abundant sunshine for solar power.

In the past, the ACC downvoted a package that would have required regulated utilities to achieve 50% clean energy by 2035 and 100% clean energy by 2070. Depending on the outcome of the 2022 election, these clean energy initiatives could either be revived or again sidelined, making key determinations for the state’s future of renewable energy.

In Louisiana, the election for two seats on the Louisiana Public Service Commission could affect residents’ electricity costs and how the state decides to prevent electricity grid failures in extreme weather. While a major shift in the commission is not expected, this decision is one of many on the pathway toward determining how the state will take action toward mitigating climate change.

In North Carolina — which is unique among other states in the American Southeast for having a plan to tackle climate change and advance clean energy — the General Assembly electoral race will be key in determining the course of this plan’s implementation and whether the state will take action towards mitigating climate change.

Key electoral races in Texas include that for the attorney general and for the railroad commission. The attorney general has the ability to influence energy policy, both in the state of Texas itself and more broadly in the country due to the large role Texas plays in energy production.

The Texas Railroad Commission oversees oil and gas production and pipelines, and the electoral race holds heavy discussion given the context of statewide power blackouts during the deadly winter storm in February 2021. During the storm, parts of the natural gas system became frozen, contributing to power blackouts and leaving more than 4 million homes and businesses without power.

In Houston, Texas, the race for the Harris County judge means determining who holds power over the county’s oil and petrochemical industrial operations and their ultimate impact on the environment. In Corpus Christi, Texas, those elected to City Council will have a say over the Port of Corpus Christi’s huge oil exportation operations.

The electoral race for the Minnesota state Senate — where governor Walz has unrolled a plan to advance pollution cuts and help in the fight against climate change — will be a determinant of the state’s environmental future. This new framework adopts the U.N. Intergovernmental Panel on Climate Change’s goals of cutting greenhouse gas emissions by 50% by 2030 and achieving net-zero emissions by 2050. The plan also involves increased spending on public transit and electric vehicles, ecosystem restoration, and net-zero carbon buildings.

The Ohio Supreme Court has three open seats this election cycle, meaning those elected to the traditionally Republican-controlled court will have a key role in determining how the state proceeds in energy accountability and climate lawsuits, especially given the context of recent a bribery scandal with an energy company.

The race for Michigan’s attorney general will be crucial in determining the fate of a liquid gas and crude oil pipeline dating back from the 1950s that has caused many spills and the danger it poses to natural and tribal lands.

Previously known as the Agriculture Improvement Act, the farm bill is passed at the federal level every five years to address the country’s agriculture and nutrition policy.

According to USEPA, American agriculture accounts for 11% of the country’s total greenhouse gas emissions, making agriculture a key facet to investigate when looking at climate change mitigation.

Though the 2023 bill will not be present on this year’s midterm ballot, this year’s midterms are expected to spark discussion regarding conservation, sustainability, and federal and state-level action toward a healthier climate and environment.

Downstream impacts of the 2022 midterms

The 2022 midterm elections give us a glimpse into the state of climate and environmental legislative change in the country. With many voters stating their concern about what the nation is doing to mitigate climate change and other environmental crises, we are eager to see the election outcomes and the future of environmental policy in the years to come.

The future of environmental policy in the United States

Interested in measuring air quality for cleaner air and a healthier climate? Get in touch with our team to learn more about our Sensing-as-a-Service solution for governments, businesses, and community organizations, using our Clarity Node-S monitors and modules that do not depend on infrastructure like WiFi or power — making them especially resilient during environmental disasters.

Air pollution is one of the greatest threats to human health worldwide, responsible for millions of premature deaths each year.
Article

Because air pollution is a complex and dynamic phenomenon, measuring a wide array of air pollutants is an important part of understanding a complete view of air quality.