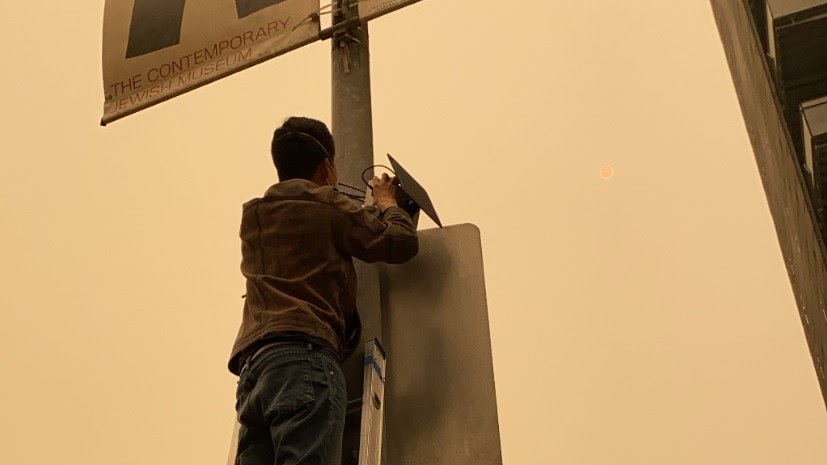 TL;DR — Increasingly severe wildfires in the western United States have meant unhealthy air quality conditions that, along with the destruction resulting from wildfires themselves, pose a significant threat to public health. Because air quality can change rapidly during wildfire events, and because wildfire smoke can be even more toxic than other forms of air pollution, it is vital to have local, real-time air quality data so that individuals, communities, and businesses can make informed decisions to protect themselves and their health. By collecting high-resolution, real-time data, low-cost sensors can serve as a valuable tool to protect public health during wildfire season.

In the United States and around the world, wildfire seasons have become increasingly drastic, prolonged, and severe in recent years. In California alone, over 6,000 fires have burned so far in 2021, accounting for over 212,000 acres of land — and unfortunately, this year’s wildfire season is far from over for California, where the average area burned has increased fivefold since the 1970s.

Severe wildfires can be attributed to a variety of factors — for one, the higher temperatures and lower precipitation levels associated with climate change create the perfect storm for destructive wildfires, especially in the Western United States where strong winds and a history of fire suppression contribute to the risk. Hot temperatures also dry out plants and soil, thereby extending the length of the wildfire season. In the Western U.S, the typical wildfire season has increased by at least 84 days since the 1970s. Forest management decisions, like allowing vegetation to build up excessively and a lack of measures to prevent human-caused ignition, also help explain why wildfires have increased in quantity and intensity in recent years.

While the impacts of wildfires to those closest to the flames are devastatingly clear, the air pollution resulting from wildfires poses a widespread public threat — sometimes even in places thousands of miles away from any active fire. For two years in a row now, cities across the United States have faced days, weeks, and months of unhealthy air quality due to wildfires burning in the Western United States. Prevailing westerly winds transport the smoke from these fires to places as far as New York City, which observed its worst 24-hour average Air Quality Index (AQI) in 15 years this July with an AQI of 154.

Air quality changes very rapidly during wildfire events, making it even more important than ever to have local, real-time air quality data to help inform decision-making during these times. Even hour-to-hour, air quality can deteriorate dramatically.

Wildfires, especially those as severe as the Camp Fire and other recent drastic wildfires, cause significant damage to existing plant and animal life and the ecosystems they inhabit, as well as to human structures. PM2.5 can negatively impact environmental conditions by harming crops and soil, causing acidic conditions in lakes and streams, contributing to acid rain, and otherwise damaging ecosystems. PM2.5 also causes decreased visibility in the form of haze.

Wildfire smoke not only threatens the environment, but also presents a grave danger to public health. Along with substantial increases in hospital admissions for asthma and other respiratory conditions, the USEPA estimates that between 1,500 and 2,500 deaths result annually from short-term exposure to PM2.5 from wildfires.

Wildfire smoke contains harmful pollutants, most notably fine particulate matter (PM2.5), which can be greatly harmful to human health. Because of its small size, PM2.5 particles can become inhaled deep into the lungs and even enter the bloodstream. PM2.5 pollution exposure is associated with worsened asthma, coughing and other respiratory symptoms, irregular heartbeat, heart attacks, and premature death.

A 2018 study conducted by the California Air Resources Board (CARB) compared the composition of wildfire smoke from the 2018 Camp Fire, the deadliest and most destructive wildfire in California’s history, to other wildfires that burned in California in 2018. The Camp Fire burned both structures and vegetation, compared to many wildfires which are primarily vegetation-burning, presenting an interesting case study for how these conditions affect the resulting air pollution.

In Chico, California, PM2.5 levels were far more extreme — during the Camp Fire, concentrations increased by almost 100 times the average. In comparison, PM2.5 concentrations increased by just nine times the average during other wildfires that year, reflecting how important it is to assess air pollution risk with quantitative measurements during wildfire events — if you don’t measure air pollution from wildfire smoke, you will not be able to confidently say just how bad it is.

In addition to alarming levels of PM2.5, wildfires can also produce air contaminants such as metals which can greatly harm human health. As concerning as elevated PM2.5 levels may be, recent studies have delved into the composition of particulate matter from wildfires and found that it can contain compounds — such as heavy metals — that are even more harmful to human health than other forms of air pollution.

The Camp Fire saw significant increases in levels of metals such as lead and zinc compared to fires during the same period which were primarily vegetation-burning. Wildfires that burn a large number of structures, such as this one, have been noted to contain more toxic air contaminants in their pollution. Structures not only contain wood, plastics, and other chemicals that release harmful pollutants when burned, but flame retardant compounds present in the structures can also have negative health effects.

[During the Camp Fire] elevated levels of lead and zinc were detected, as well as calcium, iron and manganese. Smoke containing these metals traveled more than 150 miles, and was detected in the air as far away as San Jose and Modesto.” — CARB study

While these heightened levels lasted only approximately one day, metals such as lead are considered toxic air contaminants, and even short-term exposure is harmful to human health. Lead exposure is linked to high blood pressure, reproductive damage, and cancer in adults, and behavioral changes and learning deficits in children.

Looking at short-term exposure to wildfire pollution is important, but so too is the cumulative exposure that individuals can experience, both over multiple days or over multiple fire seasons. Because wildfire smoke and its resulting air pollution are so toxic, it is more important than ever to make good decisions that protect public health from the consequences of poor air quality during wildfire season.

Because low-cost sensors (LCS) can be deployed quickly and provide a higher density of air quality measurements than traditional monitoring equipment, they are a valuable tool for protecting public health during wildfire events.

For example, the Monterey Bay Air Resources District (MBARD), has implemented low-cost sensors to collect additional data points when monitoring air quality. By using low-cost sensors in addition to reference-grade federal monitors such as FRMs and FEMs, MBARD has been able to create a higher resolution monitoring network and provide more localized air pollution data to its stakeholders.

With the use of OpenMap, MBARD can integrate its data sources together and visually represent the state of air quality across their district — simultaneously supporting pollution abatement policy and providing a source of accurate air quality data to the public.

Another public source of air quality data, the USEPA’s AirNow, also incorporates data from low-cost sensors to enable a higher resolution mapping of air quality. With more data points available, individuals are better able to understand their local air quality rather than relying solely on data from miles-away reference stations that may not accurately represent their local conditions.

In addition to being a valuable tool for AQMDs and environmental agencies, the low cost and flexibility of LCS have allowed businesses and communities to take ownership of air quality and protect their stakeholders during wildfire season.

In the workplace, recent regulations in California, Washington, and Oregon have brought attention to the necessity of protecting workers against wildfire smoke exposure, especially in states where wildfires burn for a significant season during the year. Air quality monitoring technology such as low-cost sensors that are more affordable and more easily deployed allow employers to take ownership of their employees’ health during times of heightened air pollution by using real-time, local data to support their decision-making.

California was the first state in the U.S. which, in 2018, filed emergency regulations to protect workers exposed to wildfire smoke. Employers are required to protect employees against wildfire smoke exposure when the Air Quality Index (AQI) for PM2.5 is 151 or above, the level deemed “unhealthy”. Employers must determine the AQI at or near the workplace, either using the AirNow federal site or by taking their own measurement using a direct reading instrument, such as their own low-cost sensor.

In Washington state, regulations were put into place in July 2021 in the midst of this year’s intense wildfire season in the Pacific Northwest. Like in California, employers must put measures in place to protect employees when the AQI reaches 151 or above, with a requirement to eliminate or reduce their wildfire smoke exposure when PM2.5 levels are high. Employers in Washington also have the option of checking their local air quality using sources like AirNow or the Washington State Department of Ecology Air Quality Monitoring Network, or they can use their own monitoring devices.

With this year’s wildfire season shaping up to be one of the worst on record for regions around the world — and with increasingly severe wildfire seasons occurring year after year — it is more important than ever to protect individuals’ and communities’ health against air pollution caused by wildfire smoke.

Air quality can change rapidly during wildfire events, and low-cost sensors provide the local, real-time data that is necessary to make informed decisions during wildfire season. LCS can be implemented on their own or as part of a larger network to provide higher resolution air quality data.

If you are interested in deploying low-cost sensors to establish a high-resolution, accurate air quality monitoring network — or want to learn more about how sensors can help protect public health during the volatile air quality conditions associated with wildfire events — you can get in touch with our team here.

TenX has invested in Clarity, a three-year-old company that makes air-pollution monitoring devices which provide hyper-localised and real-time air-quality readings in metropolitan areas.