compared to reference stations after application of calibration techniques 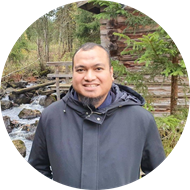 Ph.D., Researcher at Helsinki University (Finland)
Clarity’s commitment to collaborating with leading research institutions across the world has enhanced the potential for the research, development, and deployment of environmental monitoring for the benefit of society.

According to data released by the World Health Organization (WHO), the air quality in Finland is the best in the world, while the air quality in Helsinki has been listed as the fifth cleanest on a global comparison of 62 capital cities.

While low-cost sensors (LCS) present a significant opportunity for cities to improve the resolution of their air quality monitoring programs, concerns about data quality remain an challenge to the widespread adoption of low-cost air sensors.

Virtual sensors are characterized by a layer of advanced data analytics drawing on inputs from various types of physical sensors. They can be useful in cases where a physical sensor cannot be calibrated, or when the measurement of the desired pollutant is not typically available with low-cost sensors. There is a significant need for more research into the accuracy of these virtual sensors, and research on advanced modeling techniques that improve sensor calibration will enable the development of virtual sensor networks.

Martha Zaidan is a researcher with the Institute for Atmospheric and Earth System Research (INAR), a world-class institute dedicated to atmospheric research. Through a partnership with the Finnish Meteorological Institute (FMI), a research agency responsible for ensuring public safety relating to atmospheric and airborne hazards in Finland, Zaidan set out to find out whether an appropriate calibration model would enable his team to develop a scalable, high-resolution, and accurate air pollution mapping approach for smart cities.

To develop a virtual sensor network, Zaidan needed to find low-cost sensors that were reliable enough to perform continuous measurements with few interruptions, enabling the collection of adequate datasets. The sensors would also need to be capable of measuring air pollutants as well as meteorological variables. Having adequate data and rich measured parameters enables the use of data-driven approaches, such as artificial intelligence, to develop virtual sensors.

Clarity Movement Co. collaborated with INAR and the FMI to deploy four Clarity  Node-S air quality sensors from March 2018 to June 2019 in the Helsinki region. The first two units were colocated with an air quality reference station operated by Helsinki Region Environmental Services Authority (HSY), and the remaining two sensing units were installed in a state-of-the-art research station known as the Station for Measuring Ecosystem-Atmosphere (SMEAR), operated by the University of Helsinki and FMI. The deployment strategy enabled the validation and calibration of the sensors for research and development purposes.

The Clarity Node-S measures meteorological variables, such as temperature and relative humidity, and aerosol particles, such as fine particulate matter (PM2.5). The reliability of these devices is notable as they enabled the collection of uninterrupted data over the entire study period - there have been only a few air quality case studies reported using more than one year of data generated from low-cost sensors.

The Clarity Node-S was ideal for research purposes as they are highly reliable and functioned continuously for more than a year without any maintenance. This reliability is beneficial for remote and massive deployments where the maintenance requirements can be minimized. Reliability also enabled us to conduct further studies, design, and analysis because the gathered dataset was extensive and containing little missing data.

With 15 months’ worth of data uploaded to the cloud by Clarity’s platform, a team of researchers from the Institute for Atmospheric and Earth System Research (INAR) and the Department of Computer Sciences, University of Helsinki, carried out a further investigation of the Clarity sensing units’ consistency and accuracy.

Low-cost sensors are known to be insensitive when measuring low-concentration pollutants (e.g. PM2.5), as is the case in Helsinki where ambient pollution levels are low. To cope with this challenge, the researchers developed Artificial Intelligence (AI) calibration models, established using extensive data sets obtained from continuous measurements through reference instruments. The established AI models were then used to calibrate the readings of Clarity air quality sensors (Note: calibration services are provided to non-academic Clarity customers free of charge as part of Clarity’s Sensing-as-a-Service model). Zaidan found the PM2.5 measurements from the calibrated Clarity Node-S to be highly accurate and reliable following the application of the calibration technique, with R2 values > .9 as shown by the figures below.

Using the existing calibrated readings from the Clarity sensing units, Zaidan and the research team also enhanced the sensing capability by estimating some unmeasured air pollutants through the use of AI-based modeling. The methodology is known as virtual sensors. In this case, other vital air pollutant variables, such as black carbon (BC) and carbon dioxide (CO2), can be estimated or "virtually measured" using the readings of calibrated low-cost sensor measurements. Both calibration and virtual sensing results were found to be promising after they were validated against the measurements from reference instruments collected at the reference stations.

The study concluded that the best way to economically scale a high-resolution and accurate air quality monitoring infrastructure is by combining calibrated low-cost sensors with a network of virtual sensors. The paper, “Intelligent calibration and virtual sensing for integrated low-cost air quality sensors” was published in IEEE Sensors Journal and the findings were also featured in several media outlets.

This collaborative work was conducted in cooperation between Clarity and several Finnish institutions, including the INAR, the University of Helsinki, FMI, and HSY.

In the future, Zaidan plans to integrate the impact of other factors such as wind speed, land use, and mobility density to the calibration and virtual sensor models to improve urban air quality estimation. He and his team will also measure additional air pollutants including SO2, NO2, PM10, PM2.5, O3, and CO, which can be realized through LCS hardware accessories or by incorporating more virtual sensors. The end results will be a more cost-effective way to provide reliable air quality information with high accuracy and resolution to the public in smart cities.

Martha Arbayani Zaidan, Ph.D., Docent.
In addition to being a Clarity collaborator, Martha is a Research Associate Professor at Nanjing University (China) and a Researcher at Helsinki University (Finland)
www.marthazaidan.com‍

The Denver Department of Public Health and Environment (DDPHE) has made significant strides toward improving air quality in recent years.

Want to speak with one of our Air Quality Experts?