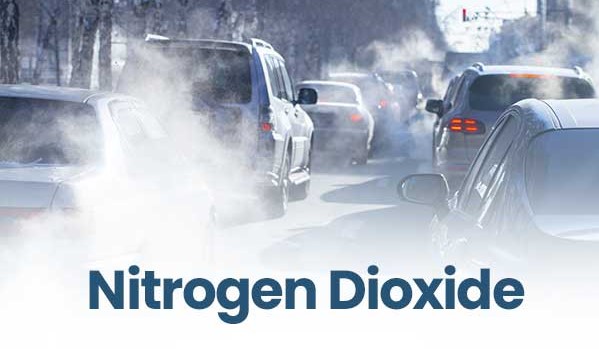 TL;DR — Nitrogen dioxide (NO₂) is a subtype of a class of air pollutants known as nitrogen oxides. Nitrogen dioxide primarily results from fuel combustion from sources such as motor vehicles and industrial activities. Nitrogen dioxide has significant impacts on human and environmental health, most notably when it comes to respiratory and cardiovascular health. Nitrogen dioxide concentration differs greatly around the world, with many areas observing steep declines in NO₂ levels in recent years while certain countries still experience extremely high levels — with significant consequences for air quality and public health in these regions.

Nitrogen dioxide (NO₂) is a criteria air pollutant that is tracked by the WHO and most regional air quality management agencies due to its effects on human and environmental health. NO₂ is one subtype of a group of pollutants known as nitrogen oxides, or NOx, which are highly reactive gases. NOx primarily enters the air through the combustion of fuel, and as such can be used as a general indicator of air pollution from motor vehicles.

Combustion is typically required for nitric oxides to be created, as oxygen and nitrogen gases will not react together in the absence of high temperatures. Although significant differences exist from one source type to another, nitric oxide (NO) typically accounts for 90–95 percent of the nitrogen oxides released  from the combustion of fossil fuels, with NO₂ typically accounting for just 5–10 percent. However, in ambient settings NO is typically oxidized into NO2 by available oxidants (such as oxygen, ozone, and VOCs) in a matter of minutes — quickly enough that nitrogen dioxide is commonly regarded a primary, and not a secondary, pollutant.

Because NO₂ comes from fuel combustion, it can be attributed to a variety of indoor and outdoor sources. Indoors, appliances that burn wood, gas, oil, kerosene, and coal — such as stoves, ovens, and space and water heaters — can generate NO₂. Unvented heaters and gas stoves also release NO₂ into the indoor air (our CEO, David, found that NO₂ concentrations spiked to nearly 200 ppb when running an experiment in his own kitchen, as reported by Vox).

Outdoors, motor vehicles such as cars, buses, and trucks contribute to ambient NO₂ pollution, as do power plants and off-road equipment.

Various spatial and temporal trends are also at play when it comes to NO₂ distribution. NO₂ levels are often higher near busy roads due to the high concentration of NO₂-emitting vehicles, and levels often peak during the morning and afternoon traffic for the same reason. NO₂ concentrations are also often higher on sunny days because the conversion of nitrogen monoxide (NO) to nitrogen dioxide (NO₂) depends on solar intensity in the atmosphere. Thus, sunnier days account for more NO₂ being formed.

Both short-term and long-term exposure to elevated levels of nitrogen dioxide in the air can have detrimental impacts on human health.

In the short term, nitrogen dioxide can irritate the airways and respiratory system as well as aggravate any existing respiratory diseases, such as asthma, contributing to greater hospital and emergency room visits for respiratory symptoms. Over a longer period of time, being exposed to heightened levels of NO₂ can contribute to the development of asthma and increase susceptibility to respiratory infections.

Epidemiological studies have also demonstrated that asthmatic children who have had long-term exposure to NO₂ have increased symptoms of bronchitis, and that reduced lung function can be linked to NO₂ levels in cities in Europe and North America.

NO₂ is also a precursor to other air pollutants, including particulate matter and ozone. It can be hard to separate the negative health outcomes of NO₂ from these other pollutants, especially since they often occur in the same environments. However, recent studies have found that increased mortality, hospital admissions, respiratory symptoms, and decreased lung function can be directly linked to nitrogen dioxide pollution. Thus, NO₂ is a harmful pollutant both on its own and for its role in the formation of additional air pollutants — and its prevention means reducing levels of other harmful pollutants too.

Apart from the negative impacts that nitrogen dioxide has on human health, it also harms the environment. Nitrogen dioxide can interact with other chemicals in the air and form acid rain, which in turn can damage ecosystems and human-built monuments, structures, and cultural sites. The nitrate particles that result from nitrogen oxides such as NO₂ also contribute to haze and decreased visibility. Other ecosystem damage, such as nutrient pollution in coastal waters, can result from elevated NO₂ levels.

Nitrogen dioxide is a precursor to the pollutant known as particulate matter (PM), which has its own significant health and environmental impacts. Check out our first blog in the Air Measurements Series here to learn more about particulate matter.

Regulation and prevalence of nitrogen dioxide

Globally, the World Health Organization (WHO) sets recommended maximum levels for NO₂, at 25 μg/m3 for each 24-hour mean, and 10 μg/m3 for the annual mean level. However, like with particulate matter, these levels are only guidelines rather than regulated standards.

In the United States, NO₂ is regulated as a criteria pollutant under the National Ambient Air Quality Standards (NAAQS) set by the Clean Air Act. The NAAQS sets both primary and secondary standards, with 1-hour averages of 100 ppb as a primary standard and an annual mean of 53 ppb as a primary and secondary standard for NO₂. The NAAQS standards are meant to protect human health and the environment, and they use NO₂ as an indicator for general nitrogen oxide pollution.

Nitrogen dioxide concentrations differ across different regions of the world as they can be attributed to both the human activities occurring and the regulations put in place by the local government to reduce emissions.

In the United States, nitrogen dioxide levels have decreased steadily over the past several decade, and are now consistently observed at levels lower than the benchmarks set by NAAQS.

Nitrogen dioxide levels also decreased across Europe from 2005-2014, especially in Madrid, Lisbon, and Barcelona, most likely due to tightened standards regulating vehicle emissions.

Across Asia during the same time period, cities differed in whether they experienced an increase or decrease in nitrogen dioxide levels — for example, in China, cities in the Northern Central Plain region of the country saw increased NO₂ levels while cities like Shanghai and Beijing saw decreases, even considering their increased level of urbanization over the time period.

Many cities in India, Pakistan, and Bangladesh saw significant increases from 2005-2014 — in fact, Dhaka, the capital of Bangladesh, saw a 79% increase in NO₂ levels, more than any other city in the world.

How nitrogen dioxide is measured

The primary method through which NO₂ is measured is by using a chemiluminescence continuous analyzer. During this process, air is drawn in and nitrogen monoxide (NO) is made to react with ozone. This produces NO₂ in a chemical reaction that also releases light. One can then calculate the difference in the airborne levels of nitrogen monoxide and general nitrogen oxides in the air to find the level of nitrogen dioxide.

Nitrogen dioxide sensor technology is also used in certain applications. These electrochemical devices produce an electrical signal proportional to the NO₂ concentration of air passing through the sensor. This method allows fairly accurate and reliable measurement of NO2 concentrations at resolutions in the parts per billion (ppb) range, although as with all lower-cost sensors, these devices can benefit from calibration to account for interfering factors such as temperature (T), relative humidity (RH) and other atmospheric gases.

Nitrogen dioxide can also be measured using diffusion tubes or other methods. NO₂ is generally expressed in parts per billion (ppb) or micrograms per cubic meter (μg/m3) and can be communicated through the Air Quality Index (AQI) for nitrogen dioxide.

Use cases for measuring nitrogen dioxide

Nitrogen dioxide is typically measured by regulatory bodies such as the USEPA and state, local, and tribal agencies in the United States and others around the world.

NO₂ is often used as an indicator of the overall level of air pollution emitted by motor vehicles, allowing air quality managers to track current levels of emissions and how these levels differ based on policies and abatement actions such as public transportation improvements to reduce the number of vehicles on the road.

Since NO₂ results from fuel combustion, it can also be measured to quantitatively evaluate the polluting effects of energy production at power plants. As such, the measurement of nitrogen dioxide emissions and public health benefits associated with their curtailment can help to make the case for actions that both improve environmental health and mitigate climate change, such as switching from fossil fuels to clean energy sources.

Clarity Nodes incorporate an electrochemical sensor manufactured by Alphasense to measure nitrogen dioxide levels and paint a clear picture of the air pollution that results from vehicles, energy production, and other fuel-combusting activities. The Node-S also measures particulate matter, and both PM and NO₂ data are calibrated with Clarity’s proprietary Remote Calibration technique. To learn more about measuring nitrogen dioxide with Clarity, you can find more information on our air monitoring solutions here.

Dr. Sunni Ivey joined us for a conversation about her air quality and environmental justice research and her use of low-cost sensors to better understand human pollution exposure.