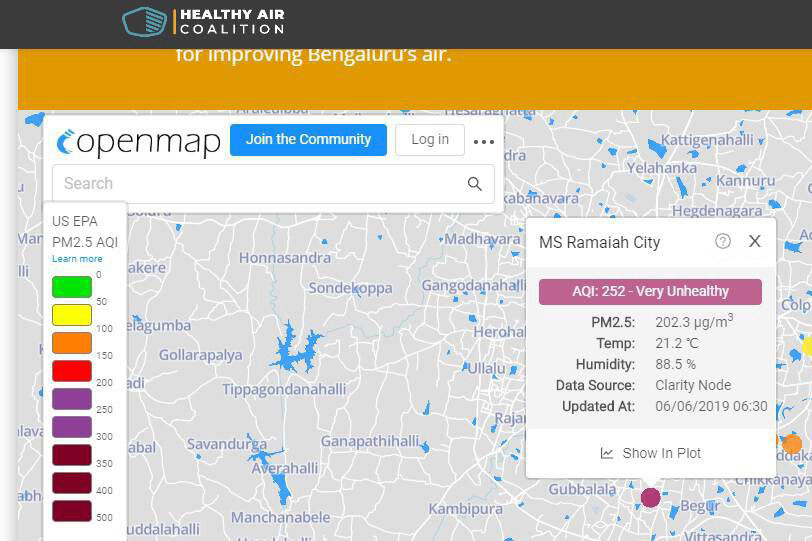 India, one of the world’s fastest growing major economies, has its own Silicon Valley in the city of Bengaluru. Home to information technology companies and multinationals such as Google, Apple, Intel, IBM, Cisco and Adobe, the city provides careers for over a third of India’s 2.5 million IT professionals.

As in most countries, rapid economic growth has come at the cost of serious and life-threatening air pollution. A staggering 14 of the world’s 15 most polluted cities are in India.

Air pollution in India leads to at least 1.2 million premature deaths each year and the country has one of the world’s highest exposure levels to PM2.5 fine particulate pollution. More than 77 per cent of India’s population is exposed to air pollution levels that are higher than the national ambient air quality standards.

In the north of India, urban pollution levels have risen dramatically because of the burning of coal in cooking stoves, forest fires and diesel fumes from transport. Air quality is so poor that the deteriorating conditions in the cities further south have all but been ignored, even though air pollution regularly exceeds safe levels. However, people actually living in cities such as Bengaluru have noticed the recent decline in air quality. IT professionals have cited their concern about air quality as a reason to move away from what was once famously celebrated as “the garden city”.

Doctors at the Jayadeva Institute of Cardiovascular Sciences and Lakeside Hospital have seen an alarming rise in heart problems in people under 40 and a 25 per cent rise in asthma cases in children under 14. Cardiologists and pulmonologists indicate that the rising air pollution levels are most likely responsible for these increases.

In April 2019, the Healthy Air Coalition was launched in Bengaluru, a collaboration of health professionals, researchers and health groups. Allied with Unmask My City, they installed 15 air quality monitors across the city. Another 25 monitors will be installed in June.

Prashanth Thankachan, researcher at St. John’s Research Institute and Medical College notes, “It’s essential that there is better monitoring of air quality in Bengaluru, to improve our understanding of individual exposure patterns in the city.”

The launch received overwhelming support from Bengaluru’s city authorities and politicians with permission granted to install several air monitors in public health centres. Two months prior, in February 2019, Bengaluru joined the World Health Organization, UN Environment, Climate and Clean Air Coalition and the World Bank’s BreatheLife campaign, with the Mayor proclaiming, “Our dream is the development of the whole city in a way that is sustainable and non-polluting, that will increase the liveability of Bengaluru for residents, and that will give other fast-growing cities examples of solutions to urban challenges.”

Helena Molin Valdes, Head of the Climate and Clean Air Coalition Secretariat commends the collaborative effort underway by civil society and public officials. “Air quality monitoring data is a critical piece of the puzzle — information on specific pollutants and sources of these pollutions provides data to better inform decision makers to help them select solutions that will benefit both people and the planet.”

Bengaluru, a megacity of 8.4 million people and the second-fastest growing city in India, is in the process of planning its growth and development strategy to 2031, one that includes a significant shift to travel by public transport and electric vehicles, an advanced waste segregation and collection system, an expanded mass rapid transit metro system, and placing a greater priority on the comfort and safety of cyclists and pedestrians — developments with potential co-benefits for air pollution control.

As a next step, the coalition will provide health expertise to inform this first city action plan on clean air, which has just been published for consultation. In addition, several research projects are planned to determine the extent of health impacts of poor air quality on Bengaluru’s residents, particularly on children.

As the sources of air pollution in Bengaluru are mainly local — transport, waste burning and construction — it may be possible to cut air pollution faster and more deeply than has been possible so far in the cities of the north such as Dehli.

Technological advance underpins economic growth. To date we have not been able to uncouple growth from environmental damage, but professions providing technical advances in clean renewable energy and transport, energy efficiency, IT and sustainable agriculture and forestry will be the careers of the future. World Environment Day reminds us that, as we pursue technical advances, we need to protect the health of our planet to protect human health.

As we post this blog, most of our daily lives have been disrupted by the coronavirus COVID-19 outbreak. During a time of uncertainty shrouded by fear, we are grateful for first responders, medical staff, and scientists everywhere at the frontline of this pandemic.
Article

Clarity Movement Co. and the City of Cupertino are working together to collect hyperlocal air quality data in Cupertino, CA.