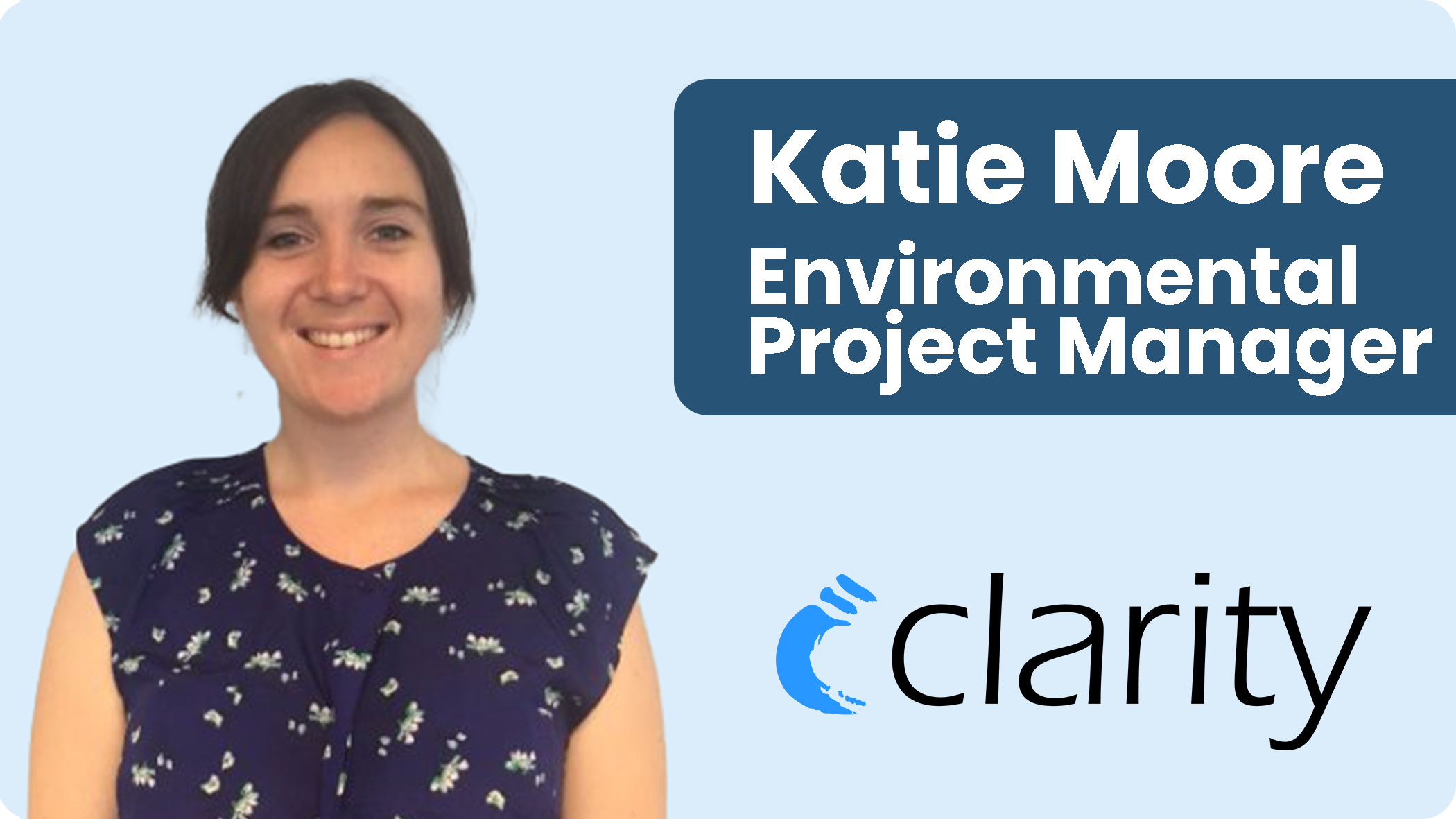 What is the pathway that led you to begin working in the air quality space?

I've spent my whole career working in the natural sciences. I started out looking at groundwater contamination, but even then I was interested in how science and data can be used by people to understand the environment around them.

I then started to work on air quality when I got a job in Louisiana with a group called Louisiana Bucket Brigade. They were working with communities mostly along the Mississippi River between Baton Rouge and New Orleans, which is an area called Cancer Alley, that has a huge amount of petrochemical industry. That position was mostly focused on the air emissions from those facilities, and that was really when I shifted to air quality and learned a lot about environmental racism, air pollution, and its health impacts, and also the importance of communities being able to gather their own data and use it for advocacy.

What does a typical day at Clarity look like for you?

I think you'll probably get the same answer from everybody on this, but it's very hard to say — there's not a typical day, which is cool and maybe also an indication of the startup world. My main role is to manage projects. We don't just ship off hardware to projects; we like to stay involved and provide support.

A typical day involves communicating with our clients from all of the different projects we support around the world to see if they have any issues or questions. I do a lot of calls with projects throughout the life stage — when they're just getting started and when they're doing analysis. A lot of my day is also spent doing that analysis, mostly on the calibration side. What is taking priority each day is really driven by what's going on in the different projects, so it's quite varied.

What has been your experience working with environmental justice groups and community groups towards improved air quality?

As I mentioned before, I came to this work through environmental justice (or EJ) and community-led research. I believe very strongly that when you're doing these sorts of projects and asking these kinds of questions, it's incredibly important that communities are leading that for a whole host of reasons. If you've got a monitoring project that you're running, it's going to be so much better to have involvement from folks who live in the area. They're going to know what the sources of pollution are, and they're oftentimes going to know what policies could exist as solutions to some of the problems.

I feel very strongly that it is the right thing to do and also the smart thing to do, in a lot of these projects, to have really strong community involvement — not only that they're involved, but that they're truly leading the work. I really love working with community-led projects. Especially because I mostly have worked within the US, I think that that's where the most interesting work is happening.

It’s interesting that within the US, the way that I was taught about air pollution is that air quality was really bad, then we passed the Clean Air Act in 1970, and things have gotten steadily better over time. It's true for some pollutants, but there are still these pockets where there are higher pollutant concentrations, and where people are being exposed to too much without any question — and those are very often poor communities and communities of color. So I think it's really important and valuable work to do, and I enjoy it.

What role does your team play in working towards cleaner air?

We're all still evolving. This sort of technology, in the grand scheme of things, hasn't been around so long and there's been a lot of progress in that amount of time. I remember,  seven or eight years ago, going to EPA conferences about these sorts of sensors, and it was a very, very different conversation in the landscape.

Even though we've come a long way, and I think the technology has really evolved and there are definitely some regulators who are quite interested in using the data, there's still not a clear pathway in all instances — especially when we're talking about environmental justice and community-led work.

If a community has concerns about their quality, puts up their own network, collects data, and even finds something that is definitely a problem, the question of who's going to look at this data and who's going to act on it is still kind of murky. The role that we can play in it is to try to make sure that less of that murkiness is coming from the data quality.

While I think there are some very legitimate questions that people need to ask of low-cost sensor data in terms of data quality, there are also many people who will question data quality in bad faith. So it's important, especially when you're working on EJ work, to make sure that the data is really there, and that we can have a lot of confidence in it.

Our role is providing data in areas where there just isn't any or isn't enough, as well as helping folks understand some of these technical complexities. I feel very strongly that not everybody has to become an atmospheric scientist to do this work. We work to help people understand the technical complexity and design projects, and make sure that the data is really robust so that they can actually use it to achieve whatever their goals are.

What role does air quality play in environmental and public health?

It's really important to say that air pollution causes a lot of illness and death globally. Even working in the air quality space every day, it can be somewhat easy to forget the magnitude of that problem.

There is a study that was done relatively recently that found that air pollution from fossil fuel industries, specifically looking at PM2.5,  was responsible for one in five deaths globally, which is just really wild. A lot of that was driven internationally, but a lot of it was also happening in the US.

Air pollution is a huge public health threat, and it's one that's going to get worse as climate change intensifies. The importance of it is definitely not going away.

PM has been very well studied, so the health impacts are something that a lot of people talk about, but it causes heart attacks, asthma attacks, and increased mortality. Air pollution really impacts people's lives in very direct ways. We could have fewer of these negative health impacts and have people living longer if we could solve these issues.

What is the most gratifying part of your work with Clarity?

Anytime that people, especially EJ communities, are able to take action with the data or use the data to support their advocacy, that's the greatest thing in the world to me.

In this role, I really enjoy getting to work with a lot of different projects — that was a shift from previous roles that I've had, where I was really focused on one project. So it's awesome to work with so many projects. I love all of our projects, but I really like the community-led ones.

Being able to really be connected to the community of people who are doing that work across the US is very gratifying to me. I also really love being able to make connections between those projects as well.

I also really like the culture at Clarity. I think it's a really great team. We're still pretty small, so that lets us get to know each other pretty well, even though we're working in different places across the country and globe. The collaboration within the team, too, is really a great part of it.

What excites you the most about the next several years for Clarity?

At Clarity, I am really excited about some of the stuff that we have planned in regards to making sure that the air quality data collected by our networks is really robust.

In terms of the air quality space in general, I think especially with this administration in the U.S., we are at an interesting moment to try to push at the federal level for EPA to think about how they want to actually incorporate some of this data from low-cost sensors. I think that, as I mentioned before, there is a big open question: if people are setting up all these low-cost sensor networks all over the place, how can that data be used?

What makes me really excited is to see if there is a clear pathway for the data to be used to actually address what communities are concerned about. I think we have some positive signs there and a positive administration for that.

Air quality is not a problem that's going to go away, and it's going to get worse with climate change in a number of different ways.

We have a lot of our team based in California and the Western U.S. and have a lot of experience working in this region. How often we see wildfires, how big of an area they burn, and how many people that those fires are impacting is going to keep getting even bigger and more intense.

We have a lot of projects that are using our sensors to have more data points to know more about where wildfire smoke is going and using that to be able to make their response to wildfire emergencies smarter. I think there will be even more growth in that.

Climate is going to make the problem of air pollution even more intense in a number of different ways. A lot of my work has been in the Gulf Coast of the U.S., and every time there's a big storm or hurricane, there are really sizable emissions from oil and gas facilities in this area, which cause elevated air pollution.

To the question of how air quality and the space we are working in is going to respond to that, I hope that there will be even more of a movement towards very clear, transparent data. Especially in these climate emergencies, people need to have information about what they're being exposed to. Also, local agencies and the folks who are responding to these issues need to clearly communicate the associated risks and what people should do to protect their health. There's a really good opportunity for this sort of technology to be a part of that solution. I'm hopeful that people will develop even smarter ways of using all of this data within those emergency situations.

Thank you for joining us!

Thank you so much to Katie for joining us in this discussion and for her commitment to improving air quality through community-group and environmental justice work.

Interested in joining our team? Check out our Careers Page to see which roles are available.

Air Quality Monitoring 2.0: How different types of air monitoring technologies are contributing to a more holistic understanding of air pollution