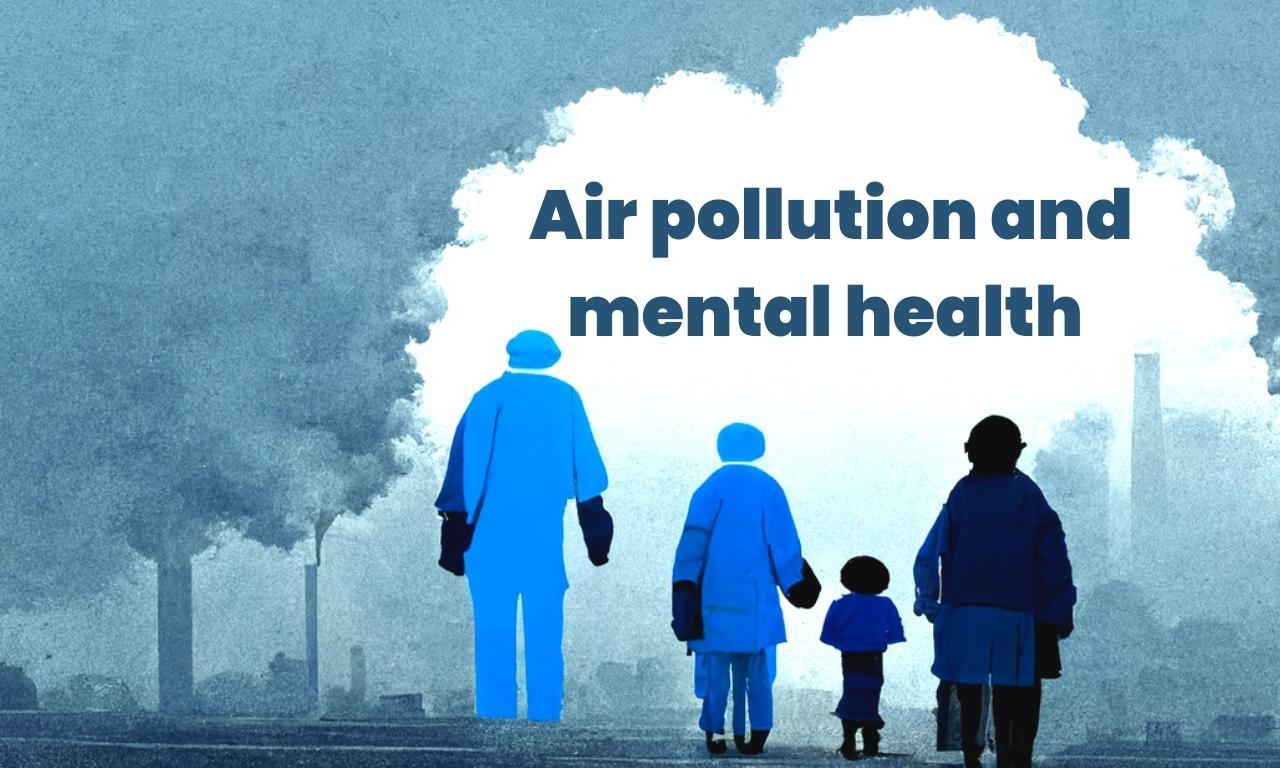 TL;DR — While air pollution’s negative impacts on the lungs and cardiovascular system are well-recognized, poor air quality also has adverse consequences on the brain and affects mental and cognitive health. We examine how air pollution affects us in every stage of life, beginning in utero and continuing until old age — as well as how these cognitive and mental health impacts disproportionately affect those in disadvantaged communities. By recognizing just how deeply poor air quality affects our health and our lives, we can inspire the action required to work toward environmental justice and cleaner air for all.

The link between air pollution and the human brain

While air pollution is well-known to impact the respiratory and cardiovascular systems in addition to other systems in the human body, emerging research shows that it also has significant impacts on our brain and mental and cognitive health.

According to data from the World Health Organization (WHO), 99% of the entire global population is exposed to unsafe levels of air pollution — meaning that the negative impacts of air pollution on human cognition are likely affecting us all (a scary thought!).

While research is still relatively early, scientists believe that the primary way air pollution affects mental health is through the avenue of inflammation.

This research reveals that chronic inflammation in animals can mimic symptoms like depression and bipolar disease in humans.

It is important to note that more research needs to be conducted to further understand the impacts that air pollution has on the brain and cognitive and mental health. This is especially difficult due to the lack of available mental health statistics, meaning researchers often have to rely on existing data on mental health outcomes and air pollution statistics to study the links between the two.

With that said, there is sufficient evidence from existing research for us to take a look at how air pollution impacts our cognitive and mental health throughout the lifecycle.

Air pollution’s impacts on the brain before birth

Alarming evidence has emerged showing that air pollution is impacting our brains before we are even born.

Emerging research shows that toxic air pollution particles have been found in the lungs and brains of fetuses. Black carbon, a component of particulate matter pollution, can be breathed in by the mother during pregnancy and be passed through the bloodstream to the fetus — where it has been found in first and second trimester placenta as well as in the organs of the fetus.

The video above discusses important research from the University of Aberdeen in Scotland which finds that black carbon particles have been found in fetal placenta, livers, lungs, and brains, demonstrating just how extensively air pollution exposure, even while in utero, affects brain development and cognitive health. (Video source: University of Aberdeen)

A study published in Environmental Health Perspectives found that mothers who had higher NO2 exposure during their pregnancy, especially in the first and second trimesters, had children that were more likely to have behavioral problems. These findings held true even in big cities like Seattle which have relatively low pollution levels.

Research also shows that those who were exposed to higher levels of certain urban air pollutants — polycyclic aromatic hydrocarbons, which are a byproduct of fossil fuel combustion — while in utero were more likely to experience attention problems and anxiety and depression symptoms as children.

How poor air quality affects the brain in childhood

For children, evidence shows that their level of air pollution exposure is a statistically significant predictor of their academic performance and affects both their cognitive and mental health.

Poor air quality has demonstrated impacts on children’s school performance. Studies show that schools in areas with higher air pollution levels also had the lowest attendance rates and the highest percentage of students that did not meet the state educational testing standards — leading an increasing number of school districts to invest in ambient air monitoring to protect student health.

A study from Boston University’s School of Public Health followed 200 children living in Boston from birth until the age of ten and found that those exposed to the highest levels of black carbon had the lowest scores on memory and verbal and nonverbal IQ tests.

Research also shows that high exposure to fine particulate matter pollution while children are between two and four years of age is linked to poorer behavioral functioning and cognitive performance.

Air pollution exposure also has significant impacts on children’s mental health. Research out of Cincinnati measured children’s brain neuroinflammatory responses to traffic-related air pollution and linked it to higher levels of anxiety, which also aligned with higher levels of the children’s self-reported depression and anxiety. Sudden spikes in air pollution have also been linked to large jumps in emergency room visits for mental illness among children.

A 2012 study comparing two cities in Mexico found that children exposed to higher levels of urban air pollution were significantly more likely to experience brain inflammation and damaged prefrontal cortex tissue. Apart from these alarming anatomical differences, the children in the more polluted city had lower scores on memory, cognition, and intelligence tests.

In adolescents, research examining ozone pollution found that those who had higher exposure while between the ages of nine and 13 years old had an increase in depressive symptoms over this period.

Depression, anxiety, and behavior disorders by age in children and adolescents

High childhood exposure to unclean air can also have negative consequences for mental health as adults.

Air pollution has been linked to a variety of serious mental and physical health problems in adults, including anxiety, depression, and neurodegenerative disorders.

In terms of cognitive health, studies suggest that exposure to elevated particulate matter levels can lead to significant short-term cognitive declines. One fascinating but alarming study even found that poor air quality can negatively impact social trust — looking at data from social media platforms, they found that polluted air conditions can cause negative emotions, which in turn can make people more likely to focus on others’ negative characteristics and find them less trustworthy.

In one animal study, the scientists found that mice who had been exposed to higher levels of pollution took longer to learn a maze task and made more mistakes — a proxy for cognitive function — compared to those who had been breathing clean air. These mice also showed more signs of depression and depressive-like responses as they appear in rodents, though these behaviors reversed when the mice were given antidepressants.

Those mice exposed to greater air pollution had physical changes to their brains, including higher levels of cytokines that signal an inflammatory response, changes to the part of the hippocampus that plays a role in spatial memory, and fewer dendritic connections between cells that are usually correlated with memory.

A 2019 study of people in the United States and Denmark found higher rates of psychiatric illnesses — such as depression, schizophrenia, bipolar disorder, and personality disorders — in those exposed to more polluted air.

In August a large study of Danish and Americans found people exposed to high levels of air pollution have much greater odds of suffering from a psychiatric illness such as depression, schizophrenia or bipolar disorder. In the Danish population, people with the highest exposures had 148 percent and 162 percent higher rates of schizophrenia and personality disorder, respectively.”

While researchers note that this emerging evidence does not prove that air pollution causes mental illness, it does indicate that poor air quality can increase the severity of mental illness as well as the social and financial burdens that it has on communities.

How air pollution impacts the brain at older ages

Older adults are no exception to those negatively affected by air pollution exposure. Increasing amounts of evidence are emerging that show airborne pollutants are associated with an increased risk of dementia, Alzheimer’s disease, and general cognitive decline.

In an extensive study of almost 20,000 women between the ages of 70 and 81 in the United States, research shows that those exposed to the highest level of fine particulate matter air pollution also experienced the greatest cognitive decline.

Researchers found the same outcomes when looking at nitrogen dioxide pollution, where high exposure was linked to accelerated cognitive decline in those already diagnosed with Alzheimer’s disease and other forms of dementia, as well as an increase in these diagnoses. Read our blog taking a deep dive into NO2 air pollution here for more information on the harms of nitrogen dioxide exposure.

Research also demonstrates the reverse relationship to be true. In a study following women 74 years and older, they found that reductions in particulate matter and nitrogen dioxide exposure over a 10-year period also resulted in a lower risk of dementia and an up to 1.6-year delay in cognitive decline.

Traffic-related air pollution has been linked to a 3% increased risk for dementia for every one microgram per cubic meter of fine particulate matter exposure.

Though it’s still uncertain, researchers theorize that air pollution likely drives increased dementia risk by causing inflammation of the brain and nervous system, in addition to oxidative stress and negative impacts on the lungs and heart.

These findings regarding the damage air pollution exposure can cause to the brain are even more concerning when considering the disproportionate impacts on low-income communities, communities of color, and environmental justice communities.

Extensive research demonstrates that Black, Hispanic, and Asian Americans are more likely to be exposed to polluted air than white individuals regardless of their income. The disproportionate burden of unclean air harbored by people of color is largely due to redlining and historical discrimination which means people of color are more likely to live near pollution sources like industrial sites and highways.

One study demonstrated that for every 10 µg/m3 increase in PM2.5 exposure, there was a large jump in emergency room visits for mental health issues, even when exposure levels remained below the National Ambient Air Quality Standards (NAAQS) set by USEPA. This jump was even greater for children living in higher-poverty neighborhoods.

These effects are compounded when considering that air pollution does not act alone to create these poorer mental and cognitive health outcomes because those that experience the highest air pollution levels also tend to face other hardships like poverty, crime, and racism that negatively affect mental health and often lack access to mental health resources.

[T]here’s a lack of awareness that air pollution may increase the severity of mental illness, and thereby substantially increase the social and financial burdens in communities already struggling with these other social and economic challenges. Behavioral healthcare systems frequently aren’t aware of links between pollution and mental illness, failing to consider it in diagnoses and missing opportunities to help people protect their mental health.”

Keeping in mind that 99% of the global population breathes unclean air that does not meet the World Health Organization guidelines, it is essential we understand the true cost that air pollution has on our daily lives. To learn more, read our blog here taking a deep dive into how poor air quality affects the body from head to toe.

Interested in measuring air quality for cleaner air, improved physical and mental health, and a healthier climate? Get in touch with our team to learn more about our Sensing-as-a-Service solution for governments, businesses, and community organizations, using our Clarity Node-S monitors and modules that do not depend on infrastructure like WiFi or power — making them especially resilient during environmental disasters.

Clarity is announcing two ongoing research partnerships with the prestigious French engineering university, École Polytechnique, as well as the University’s renowned Cisco “Internet of Everything” Chaire, the academic and research program focused on wireless sensor networks.