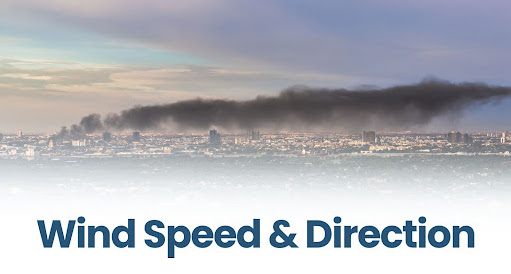 How wind originates and its patterns around the globe

While wind is not an air pollutant, wind speed and direction data are essential measurements to collect when looking to understand air quality dynamics in a given region. Wind plays an important role in the movement and dispersion of air pollution — you can think of wind speed and direction data as a map of the air quality “landscape”, providing information on where air pollution originates and where it is prone to travel.

Wind itself is simply the movement of air, arising as a result of climatic and weather patterns that cause differences in air pressure. Pockets of warmer and colder air form as sunlight hits the earth, unevenly warming the air due to various geographical features on Earth’s surface and the varying angles at which the sunlight strikes.

Temperature changes in the air cause pressure differences, as warm air rises and leaves an area of low pressure behind it. In lower pressure areas, gases in the air are less dense. Due to the principle of diffusion, gases move from areas of high pressure to low pressure. The greater the difference in the pressure between two areas, the faster the gases will move, creating wind.

On a larger scale, different wind patterns occur in different environments and geographical regions. Sea breezes commonly occur because inland areas heat up on sunny days, warming the air above the land. The cooler air above the sea then moves inland through diffusion, creating a breeze.

Similar patterns occur on a global scale, creating far-reaching wind patterns such as trade winds. In tropical areas which always remain warm, the air heats up, rises, and spreads north and south high above the land. Lower in the atmosphere, the cooler air from the north and south are pulled in towards the tropics.

Geographic features on the Earth’s surface also affect wind and resulting air quality. Coastal areas or regions with few geographic features obstructing air tend to experience more windy weather, and thus, better air quality because the wind carries away much of the air pollution that may have originated in the area.

How wind is linked to air pollution

Wind carries air pollutants away from their original source and can disperse them elsewhere, meaning that pollution in one area can affect air quality in an extensive area. During the wildfire season of 2021, smoke from fires in California and Oregon was carried by wind to states as far as New Jersey, New York, and Pennsylvania, creating unhealthy air quality conditions thousands of miles away from the pollution source.

Higher wind speeds generally translate to a greater dispersion of air pollutants, resulting in lower air pollution concentrations in areas with stronger winds. As the ground heats up during the day, the air generally becomes more turbulent, causing air pollutants to disperse in the air. When the air is cooler at night, more stable conditions occur, causing pollutants to tend to disperse less.

Understanding wind speed and direction helps to pinpoint the sources and forecast the trends of air pollution in a given area. When wind carries air pollution away from its source it can appear that there are lower levels of pollution coming from this source, but this pollution has just been moved elsewhere, affecting air quality in a different location.

One such wind pattern explains why a large number of cities tend to have poorer east ends with greater air pollution. In middle latitudes on Earth — where most of the world’s major cities can be found — the wind pattern known as westerlies blows air eastwards. A study shows evidence that these westerlies have tended to blow air pollution eastward, creating eastern sections of cities with greater air pollution, which has been historically tied to sections where individuals with lower socioeconomic status would live.

The way wind can distribute air pollution elsewhere is an important factor when it comes to looking at air pollution levels in a certain city or state. Measured pollutant levels there can reflect not only the pollutants originating there, but also those brought to the area from outside sources by wind, especially when considering whether the location is downwind from a significant pollutant source. Pollutants can travel hundreds of miles, which can make it hard for downwind states to meet standards for pollutants like PM2.5 and ozone — in fact, it is estimated that air pollution carried across the Pacific Ocean from Asia by prevailing westerlies has contributed to as much as 65 percent of an increase in ozone in the Western United States in recent years.

A variety of winds and wind patterns differentiate the way air pollution is moved throughout the world, making wind speed and direction measurement vital to truly understanding the complex dynamics of air pollutant creation and dispersion. To understand the significant human health and environmental impacts that come from pollutants moved by wind, read our recent blogs on particulate matter blog and nitrogen dioxide.

When wind must be measured

Because wind speed and direction provide important information about air pollution concentration and movement, certain operations require that wind be measured. The USEPA requires that regulatory air quality management agencies process certain meteorological data — such as wind speed and direction — in support of regulatory air quality modeling as specified in the Guideline on Air Quality Models.

In addition, many industrial operations such as power plants and mining facilities use anemometer technology to ensure that they can know how air pollution generated from industrial activities will be dispersed.

For example, in the United States, the Mine Safety and Health Administration (MSHA), which operates under the United States Department of Labor, includes an airflow requirement in their safety regulations. MSHA requires mining operations to ensure that wind speed is high enough to provide airflow — especially of harmful air pollutants like carbon monoxide (CO) that can be present — and that wind speed into the mine does not exceed a maximum air velocity of 500 feet per minute, unless the mine ventilation plan can specifically accommodate it.

In other countries, such as Australia, mine airflow has been considered an important factor when looking at how to ensure safety for mining operations. In Queensland, safety legislation requires sufficient ventilation of mining operations to remove air pollutants from the air that workers breathe within the mines.

How wind speed and direction are measured

The primary device used to measure wind speed and direction is known as an anemometer. The most common design for anemometers involves three or four cups attached to horizontal arms, which are then attached to a vertical rod.

As the wind blows, the cups rotate, making the rod spin and indicating the wind direction. By counting how many rotations occur each time period, the anemometer can be used to calculate wind speed. Anemometers — such as the Clarity Wind Module, pictured below — can also often provide other meteorological measurements such as temperature, humidity, and air pressure.

There are variations of anemometer design, such as a windmill type where the rods rotate horizontally, as well as a hot-wire anemometer, where an electrically heated wire is used to determine wind speed by calculating the amount of power needed to keep the wire hot — higher wind speed means more power is needed.

Other anemometers may use sound waves or shine laser beams onto particles in the wind to measure the properties of wind. Other types of technology, like wind socks and weather vanes, also exist for this purpose.

Wind speed is generally communicated using either miles per hour (mph), kilometers per hour (kph), or knots, where one knot is the equivalent to one nautical mile per hour, or 1.15 land miles per hour.

Wind direction is reported according to what direction it originates from — for example, a north wind blows from north to south. Winds are usually reported using either cardinal directions, or degrees of direction, and can be visualized using wind roses.

Anemometers are used frequently in industrial plants and mining operations to measure how air pollution originating from the site is affecting air quality elsewhere, in terms of both the speed and direction that it is being carried away. Air pollution carried from other pollutants sources, such as the particulate matter from large combustion plants, has also been studied in relation to how wind moves the resulting air pollution.

Knowing how air pollution is moving can help drive the appropriate actions to take to protect human and environmental health.

Include wind speed and direction measurements in your Clarity network

Clarity is thrilled to have recently introduced our Wind Module, an ultrasonic anemometer and weather station. This lightweight and durable sensor measures the 2-dimensional horizontal components of wind speed and direction, providing you better insight into where air pollution is coming from — and where it is headed.

The Wind Module also measures atmospheric pressure, ambient temperature, and ambient relative humidity — you can visit the Wind Module product page on our website to download a specification sheet or request a quote.

In the second installment of our Air Quality Measurements Series, we cover nitrogen dioxide (NO₂) and how it is tied to poor air quality, human health, and environmental damage.
News

Technology can be used to move policy, by providing better datasets to mayors. Panelist David Lu, CEO of Clarity Movement, highlighted the power of data.