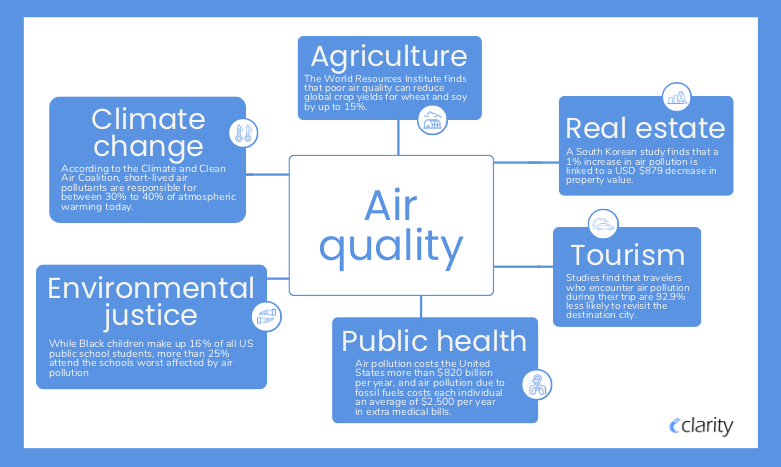 TL;DR — While air pollution’s connection to other environmental issues such as deforestation and climate change is more readily recognized, poor air quality also impacts a variety of other sectors that may not be thought of as environmentally-tied, such as tourism and real estate. By recognizing the complex web of effects that air quality has on environmental and non-environmental sectors alike, we can paint a more complete picture of the benefits that come with improving air quality and find “win-win” solutions that galvanize action.

However, it is not always recognized just how much air quality can impact other sectors — such as tourism and real estate, which both face major economic risks associated with air pollution.

By improving air quality, we can promote a ripple effect of positive benefits for the environment — as well as for a wide range of other sectors of society.

According to the Climate and Clean Air Coalition, short-lived air pollutants are responsible for between 30% to 40% of atmospheric warming today.

Many substances that act as air pollutants, such as carbon dioxide, methane, and particulate matter, all impact climate change. In fact, many greenhouse gases and air pollutants share the same emission sources — meaning that reducing these emissions can have two-fold benefits for air pollution and climate change.

For more on this, read our blog discussing the ways that different air pollutants contribute to climate change here.

Read our blog about how air quality co-benefits can help drive climate action here to learn more about the complex ties between these environmental crises and the way that action can be taken to mitigate both.

There are strong links between the push for cleaner air and the environmental justice movement. Unfortunately, the communities that face the highest levels of air pollution tend to be those in economically disadvantaged areas.

[E]nvironmental justice means the fair treatment of people of all races, cultures, and incomes with respect to the development, adoption, implementation, and enforcement of environmental laws, regulations, and policies”

As defined above, environmental justice places heavy importance on recognizing the disparities that different communities or neighborhoods — even those within the same city or region — can experience in environmental and public health outcomes due to issues like air pollution.

It is essential to recognize both the present and historical conditions that lead to a disproportionate burden of air pollution being placed on historically marginalized communities. For example, redlining in cities has contributed to communities of color becoming hotspots for polluting industries and roadways, resulting in much greater air pollution exposure for people of color living in those areas.

Children are even more susceptible to the damaging effects of air pollution, which can impact the growth of their lungs and make them more prone to other health impacts when exposed to heavy air pollution. The disparities between different communities are clear — schools with a greater number of students of color are more likely to be located near sources of pollution like major roads. This means that respiratory symptoms such as asthma keep students at home, with Black and Latino students having a greater rate of missed days of school.

While [B]lack children make up 16% of all US public school students, more than a quarter of them attend the schools worst affected by air pollution. By contrast, white children comprise 52% of the public school system but only 28% of those attend the highest risk schools. This disparity remains even when the urban-rural divide is accounted for”

Monitoring and improving air quality —  especially at the local level where high-resolution air quality data can be collected to paint a picture of local air quality sources and trend — is crucial in taking action towards reaching environmental justice and improving health outcomes at the community level.

Air pollution has huge impacts on public health and related healthcare costs. Recent studies have found that air pollution due to fossil fuels costs each individual an average of $2,500 per year in extra medical bills in the United States.

Air pollution affects nearly every area of the human body from head to toe. To read more about the ways that air pollution impacts human health — not only the respiratory and cardiovascular system but also the eyes, brain, stomach, liver, bones, and reproductive system — read our blog that takes a deep dive on the health impacts of air pollution here.

According to a report from the Natural Resources Defense Council (NRDC) that compiled data from several dozen scientific papers, air pollution costs the United States more than $820 billion per year. They outline the following annual costs:

Studies have found links between air pollution and a variety of diseases and illnesses, such as cancer, cardiovascular disease, and respiratory disease.

One long term studying conducted from 2000 to 2016 found that lung cancer incidence was associated with increased reliance on coal for energy generation.

Children who are exposed to heavy air pollution are more likely to:

Research finds that reduced levels of PM2.5 pollution can lead to significant reductions in the number of low-birth weight and pre-term birth infants around the world, especially in low- and middle-income countries.

In Southern California, there were fewer cases of asthma with reductions in ambient nitrogen dioxide and PM2.5 pollution, and bronchitis symptoms also declined.

Air quality improvements can make a huge difference in public health outcomes — the key is quantifying and communicating these benefits to help justify the social return on investment of cleaning up our air.

The consequences of poor air quality on agriculture

Agriculture can both contribute to and suffer from poor air quality. Ammonia is one pollutant whose emissions come principally from agriculture, with livestock manure and chemicals making up 95% of total ammonia emissions — or up to 58% of ammonia-induced particulate matter air pollution across European cities.

Air quality also affects agriculture — according to data from the World Resources Institute, crop yields for wheat and soy can be reduced by as much as 15% and maize up to 5% due to air pollution. Too much ammonia can lead to too great a nutrient supply in the soil, cause excessive algae growth, and lead to biodiversity loss.

According to the UN Food and Agriculture Organization, crop yields of staples like rice, maize, and wheat will decrease by up to 10 percent per degree Celsius of global warming. Extreme weather and heat will cut staple crop yields across the Mediterranean region by up to 25 percent in the coming decades.”

Poor air quality also affects access to food, especially in areas like the tropics and subtropics where subsistence farmers and outdoor laborers will face a reduced number of workdays due to lower breathability and hotter days — limiting their incomes and increasing the cost of food across the globe.

A recent study out of Stanford estimates that corn and soybean yield gains increased by 20% over the period of 1999 to 2019 due to air pollution reductions, an amount which totaled $5 billion per year in gains.

A recent study from Science Advances works to uncover how air pollution impacts crop yields by looking specifically at nitrogen dioxide. Using satellite measures of crop greenness and nitrogen dioxide levels, the researchers estimated that cutting nitrous oxide emissions in half would improve the crop yields by:

The researchers hope to conduct future work to look at how a variety of factors — such as the concentration of other pollution and meteorological variables like drought and heat — affect nitrogen dioxide’s impact on crops across different regions, seasons, and years.

Air pollution’s ripple effects on tourism around the globe

Though perhaps not always considered an environmentally-tied sector, the demand for tourism is highly dependent on environmental conditions.

Recent research shows that both the demand for global tourism and individual perceptions are positively influenced by positive air quality trends — and conversely, that decreases in air quality lead to decreases in tourism or to a lower likelihood to visit the destination in question.

Because air pollution can be much more visible that other types of pollution, such as in the water or soil, it is more easily perceived by the public and therefore has a greater influence on resulting tourism rates.

One study specifically looked at air pollution in China to examine how tourists were impacted by the air quality in the region or city they were visiting.

The study also found that in addition to raising tourists’ concerns about the way air pollution would impact their health, poor air quality also deteriorated the overall travel experience and the travelers’ satisfaction, which may discourage them from revisiting the destination in the future.

Because air pollution has impacted many tourism destinations, it now also attracts more attention in the media related to tourism. Recent studies have found that air pollution has a push effect on outbound tourism and negatively affects tourist arrivals to the location.

However, economic growth may actually have a two-fold effect in the relationship between air pollution and tourism. Interestingly, the rapid economic growth of countries such as China and India is both associated with greater air pollution — because of industrial and transportation emissions associated with this growth — but also with greater attraction to tourists due to the inbound business and improved infrastructure that comes along with this growth.

Housing prices are another sector that may not be automatically linked to environmental health but which are actually highly impacted by the state of the air.

In a working paper from the National Bureau of Economic Research, researchers compare the changes in air pollution levels and housing prices in non-attainment areas (or those that do not meet the federal clean air requirements) to those in attainment areas. They found that localized reductions in air pollutants such as particulate matter lead to higher housing prices.

A study examining South Korea finds that a 1% increase in the level of air pollution can cause an average decrease in the value of a local real property by 0.32%, or the equivalent of $879.

The researchers also find that air pollution has a more significant and direct impact on housing prices in urban areas than in rural ones. However, because increasing urban housing prices also have a spillover impact on suburban and rural housing, the impacts of air pollution may have a strong spillover effect as people migrate towards cleaner air.

What we can make of air quality’s widespread ripple effects

Understanding how air quality is related to a variety of other sectors — from environmentally-linked sectors like climate change and agriculture to non-environmental sectors like tourism and real estate — makes a strong case for why it is essential to improve air quality.

Cleaner air creates a ripple of positive effects, leading to environmental, public health, and economic benefits. With certain issues, such as climate change, we can also leverage the co-benefits that air quality brings to help incentivize mitigation strategies.

It is crucial that we recognize how deeply these issues are intertwined, as recognizing this network of impacts helps us to find “win-win” solutions with co-benefits across all of these sectors.

Interested in measuring air quality for cleaner air and a healthier climate? Get in touch with our team to learn more about our Sensing-as-a-Service solution for governments, businesses, and community organizations, using our Clarity Node-S monitors and modules that do not depend on infrastructure like WiFi or power — making them especially resilient during environmental disasters.

By better understanding the relationship between air pollution, fossil fuels, and a changing climate, air quality co-benefits can be quantified to incentivize climate change action