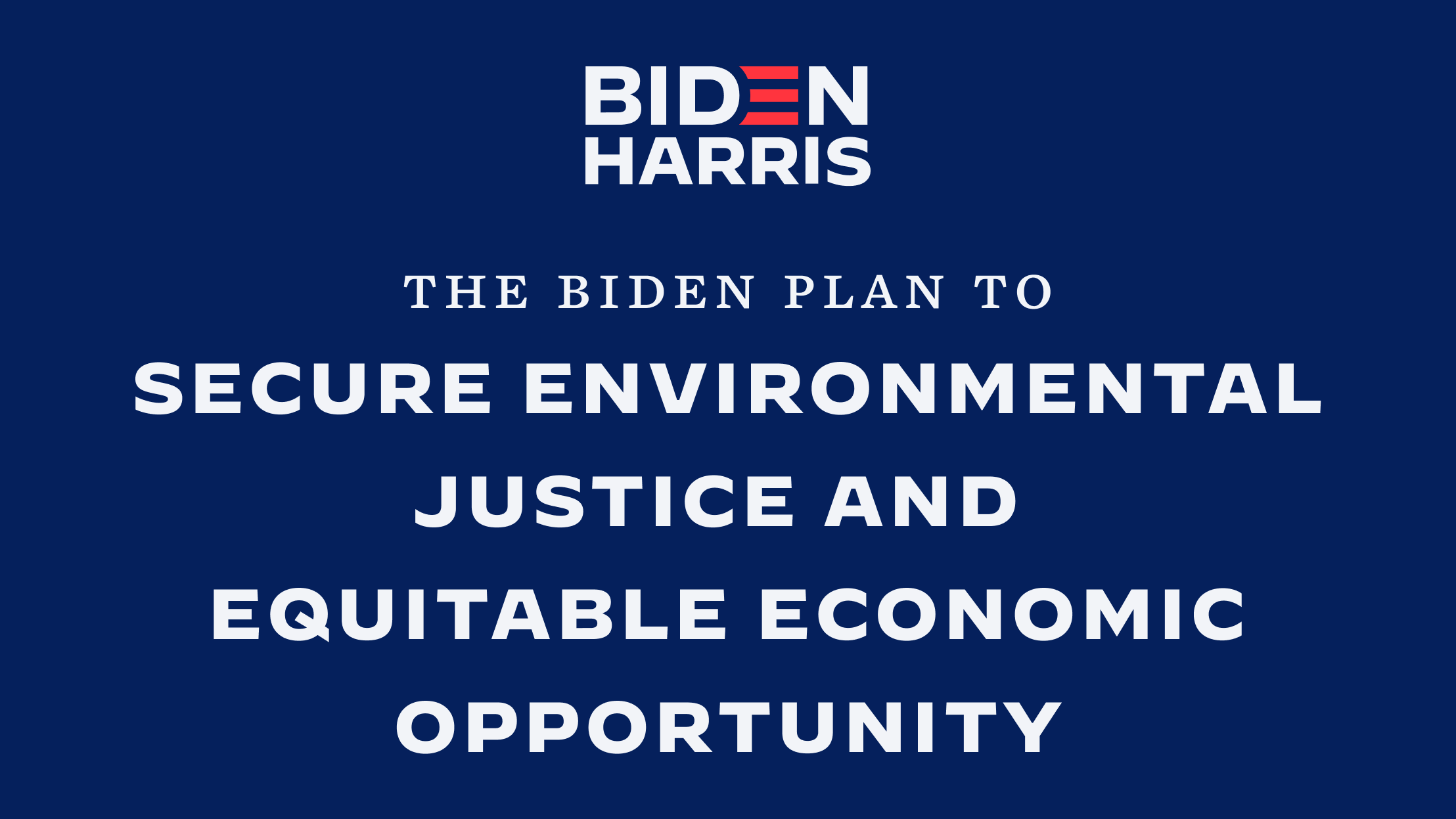 TL;DR - It has been a great couple of weeks for federal climate and environmental justice (EJ) policy in the United States. With the signing of a series of Executive Orders on climate and the environment during his first weeks in office, Biden has reaffirmed his commitment to including EJ as the centerpiece of his environmental and climate policy. Organizers who have spent decades working to make EJ a mainstream environmental priority are seeing their work pay off.

As Joe Biden’s campaign gained momentum over the past few years, environmental and climate justice groups worked tirelessly to ensure that adequate and equitable environmental policy would have a prominent place in his campaign promises. These groups, many of which have spent decades campaigning for environmental justice, pushed Biden to commit to an environmental agenda that was not only aggressive enough to meet the current climate crisis moment but one that places racial and economic justice directly at the center.

In line with its general attempts to dismantle the EPA and disenfranchise the communities it protects, the previous administration consistently sabotaged environmental justice efforts, even (unsuccessfully) attempting to allocate $0 to support these programs in 2017 and 2018. Inadequate funding has very real impacts on the ability of government agencies to fulfill their missions, and the U.S. saw a significant reduction in the hamstrung EPA’s ability to enforce regulatory measures. Supplemental Environmental Projects (SEP) decreased by 48% from 2007 to 2018, while enforcement actions with injunctive release were down a whopping 58% over the same period. The communities that the EPA protects were left high and dry, while many career EPA scientists and administrators left the agency either due to restructuring or out of disgust for the way this globally respected institution was being treated.

The new administration has set to work undoing the destruction of the past four years and placing environmental justice front and center in their Environmental Justice and Equal Economic Opportunity plan, which will spur a surge of energy and resources back into the EPA. And with a series of executive orders passed within the first week of Biden’s inauguration, they have already begun to establish key mechanisms for ensuring that Biden’s campaign rhetoric is matched by his policy.

On Wednesday, January 27th, Biden issued a series of executive orders prompting sweeping federal climate and environmental action. The scope of these orders is broad, ranging from halting federal oil and gas subsidies to directing national security officials to include climate change in risk assessments. These directives mark an important tone shift in federal climate policy - stating clearly that equity and environmental justice would be at the center, not the sidelines, of federal action.

The message was clear: communities of color and low-wealth have always faced greater environmental threats in this country, and climate change stands to further widen that gap - unless we take broad and decisive action now.

This message is one that environmental and climate justice advocates have been pushing for decades, and Biden’s executive orders represent a significant step toward the action that is required on these issues. One of the most notable and concrete developments so far is the creation of an Interagency Council on Environmental Justice, pushing for a renewed focus on delivering environmental justice not only at the US EPA but also at the Departments of Justice and Health and Human Services.

The following day, Representative Cori Bush and Senator Ed Markey introduced the Environmental Justice Mapping and Data Collection Act of 2021. The bill would authorize $94M in funding for a system to comprehensively identify and map the environmental and public health burdens that communities face and collect high-quality data through a government-wide interagency process.

It also, importantly, mandates that communities be in the driver's seat of this process, able to add in and define what data, from toxic waste sites to food insecurity to over-policing, defines environmental injustice in their community. This data and mapping effort would build on EPA’s current environmental justice mapping tool, EJSCREEN, which the Trump administration let languish. The data collected is essential for one of Biden’s other initiatives, Justice40, which will direct 40% of climate-related spending to EJ communities.

This bill will federally fund and create an inter-agency initiative to determine down to the neighborhood, what are the environmental risks. Because what gets measured gets done”

The Bush/Markey bill cuts to the core of the matter - we can’t take action on environmental justice without good data. That data must include good air quality data.

While levels of U.S. air pollution have dropped dramatically since the implementation of the Clean Air Act in the 70s, that improvement is uneven and many communities, primarily Black and brown communities, still breathe in unhealthy levels of air pollution. Black and Latino Americans disproportionately inhale air polluted with PM2.5, and a recent study looking at nationwide air pollution disparities in the United States found that the least white areas have baseline NO2 levels 2.6 times greater than the most white areas. Nearly half of  Latinos in the US live in counties where the air doesn’t meet EPA public health standards for smog according to Green Latinos.

We can’t act on what we don’t measure, and action is desperately needed to upgrade our national air monitoring infrastructure. The current US air monitoring network is made up of large, expensive reference monitoring stations managed primarily by state and local environmental agencies under the oversight of EPA. The network is sparse, often located far from communities that are impacted by the worst air pollution exposures.

It is also chronically underfunded and falling into disrepair. A December 2020 report by the U.S. Government Accountability Office (GAO) found that investments in monitoring infrastructure had declined 20% since 2004, even after adjusting for inflation. It also found that EPA, charged with overseeing state programs failed to track whether the equipment was outdated and in need of replacement.

Environmental justice advocates have long known that the current monitoring network wasn’t able to catch all of the air pollution threats they faced and have often led their own monitoring campaigns to fill in the gaps. Recent reporting by Reuters found that the current regulatory monitoring network regularly failed to capture even major pollution events like refinery explosions, which disproportionately impact environmental justice communities.

Beyond the inadequacy of the monitoring infrastructure, data from regulatory networks are often inaccessible and difficult to wade through, even for air quality scientists. With increasing air quality threats posed by climate change such as last summer’s wildfires across the Western U.S., and with new research showing how air pollution exposure disproportionately impacts communities of color and low-wealth, it is more important than ever to take action to reduce air quality exposures for those communities. And a critical first step is to expand, modernize and democratize our air quality monitoring - that which gets measured gets done.

We have seen models of what this air monitoring future could look like, and there are some real, concrete steps that the Biden administration can take to make it a reality. As a first step, the EPA could follow the recommendations outlined in the GAO’s report, and provide clear guidance and support to state agencies looking to integrate new and lower-cost monitoring technologies into their networks.

The Biden administration could also learn from and build on California’s AB617 model, which funds community-led air monitoring projects and ties those to emissions reduction plans. They could increase funding for community-led monitoring and EPA’s existing EJ Grant program ( House Democrats included $100 million for exactly this in their proposed COVID funding bill), and through EPA rulemaking create mechanisms for that data to trigger regulatory action. They could learn from community-led monitoring projects throughout the country that have been seeking to do just that.

More air quality monitoring data is certainly not a silver bullet for delivering the safety, health, and justice that frontline communities have long been fighting for. But it can serve as a foundation for those communities and regulators to drive real substantive policy action.

Clarity announced it successfully closed a US$9.6M Series A+ funding round, which will support growth worldwide and accelerate product development to address climate change.
Article

The next installment in our Air Quality Measurements Series covers ground-level ozone pollution with insight from our guest author Jessa Ellenburg, 2B Technologies.