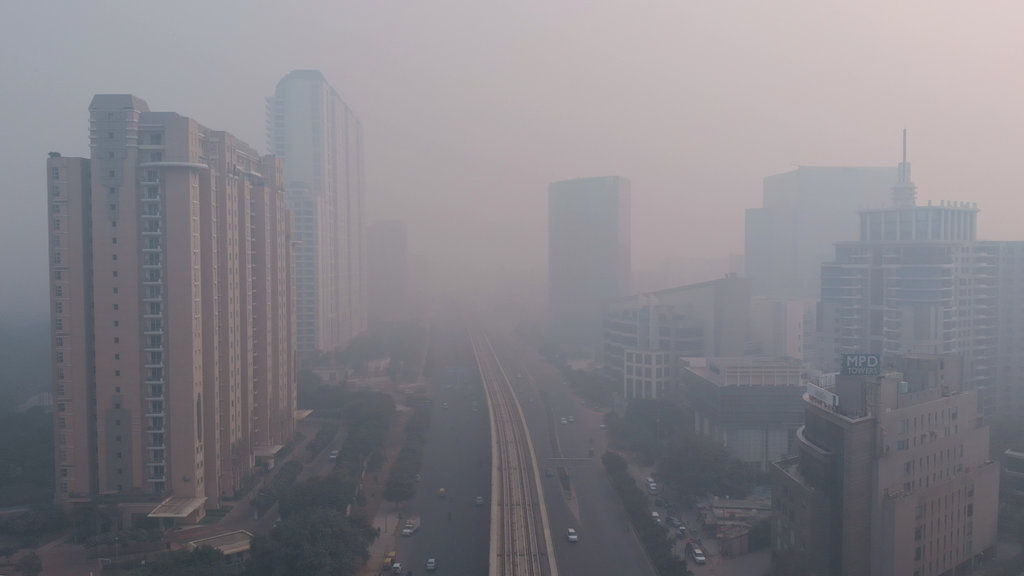 TL;DR — Air quality tends to be worse in urban areas where pollution sources like power generation, vehicle traffic, and construction contribute to high pollution levels. Particulate matter and nitrogen dioxide are major pollutants of concern when it comes to urban air quality, and both have significant negative health consequences. In order to combat urban air pollution, a variety of innovative approaches to improving urban air quality have been developed, including urban gardens, green spaces, wind tunnels, smart traffic lights, and low-emission zones.

In general, air quality in urban areas tends to be poor. Over 80% of people living in urban areas around the world are exposed to air quality levels higher than the World Health Organization’s 2005 guidelines for acceptable levels of air pollution, with those living in low-income cities at the highest risk for respiratory diseases and other health problems. This is especially alarming given that the WHO significantly reduced their recommended levels of acceptable air pollution exposure in 2021 – meaning that an even higher percentage of these cities will fail to meet the new guidelines if they don’t take action to improve air quality.

One major source of air pollution in urban areas is vehicle emissions, which release both nitrogen dioxide and particulate matter air pollution into the air. Other major sources include construction, commercial cooking, wood burning, boilers, and generators.

The European Union’s urban population exposed to harmful levels of air pollution in 2010-2012, according to EU limits and the 2005 WHO guidelines

The issue of high air pollution in urban areas is only compounded in economically developing cities. According to UN data, 98% of cities in low-income and middle-income countries with over 100,000 residents do not meet the aforementioned WHO air quality guidelines. In high-income countries, this figure becomes 56% of cities.

Pollutants of concern in urban areas

Nitrogen dioxide (NO2) is one major air pollutant of concern in regard to urban air quality. Nitrogen dioxide pollution stays mostly concentrated in the area where it is emitted, meaning that areas with high vehicle traffic like urban areas tend to have the highest NO2 levels.

NO2 pollution has been linked to a myriad of negative health effects, including detrimental impacts on organ health, neurodevelopment during pregnancy, new onset asthma in children, and lung function decline in elderly individuals. For more information on the negative consequences of nitrogen dioxide pollution exposure, read our air quality measurements series blog focusing on the pollutant here.

Particulate matter air pollution is also a major player in urban air quality. PM2.5 includes soot, dust, smoke, and liquid droplets that are less than 2.5 micrometers in diameter, and these particles are even more harmful than larger particles because they can be inhaled deeply into the lungs and also enter the bloodstream, eventually lodging in the organs.

PM2.5 can also come from vehicles, as soot and dust are generated by both fuel burning and tire-break pad friction that occurs during driving. Other sources of PM in cities include smoke from fires and emissions from power plants and industrial facilities.

Particulate matter exposure has been linked to a slew of poor health outcomes, such as chronic inflammation, poor lung development during pregnancy and early childhood, as well as lung function decline in older adults like nitrogen dioxide.

Read our blog focusing on the impacts of particulate matter pollution here for more information.

Read our blog here for more information on air pollution in cities and why it is essential that cities have high-resolution air quality data to plan for climate change.

Various creative approaches have been developed to help combat the high air pollution levels that are often found in cities.

It is important to note that in addition to these innovations, it is crucial to have air quality monitoring networks in place to collect data in order to evaluate whether any new approach creates effective change.

Read our blog here for more information regarding the best practices to follow when deploying low-cost air sensors in the urban environment.

Urban gardens that incorporate more greenery into cities are one approach that helps fight air pollution. Plants in these gardens absorb pollutants from the air and release oxygen, helping to improve air quality.

Implementing urban gardens can also help in dealing with extreme heat, a phenomenon that has become increasingly frequent with climate change.

Researchers in Phoenix, Arizona note in their Cool Urban Spaces Report that tree coverage and more vegetation coverage on the ground can significantly ease cooling needs, which is especially relevant for low-income neighborhoods which tend to have less overall vegetation, leading to higher summertime temperatures.

Using vegetation for cooling also helps decrease the need for air conditioning, which is very energy intensive, causing more fossil fuels to be burned and releasing more carbon dioxide emissions into the environment.

Urban gardens can also be used to improve food security, which at its core is tied to environmental justice.

A global analysis in Earth’s Future found that urban agriculture can account for 180 million tons of food a year. That translates to 10% of the “global output of legumes, roots, and tubers, and vegetable crops.”

For more information on the ties between agriculture, air pollution, and climate change as well as how these issues related to food security, read our blog here.

Many cities, from Bogota to New York, are investing in green spaces as a way to combat air pollution.

Green spaces, known as a type of nature-based solution, are effective because greater vegetation cover mitigates the urban heat island effect — a phenomenon where cities, which primarily cover the land with buildings and pavement rather than vegetation, absorb and retain heat. This results in increased energy costs needed for cooling, worse air quality, and more heat-related illnesses and mortality.

In Seoul, city leaders are working to create a wind path forest, where they channel air into the more polluted city center by planting trees close together along roads and rivers, helping to reduce air pollutant concentrations as well as bringing cooling breezes into the city.

Wind can play an important role in decreasing air pollution as greater ventilation helps to disperse pollutants and mix them with clean air. Higher wind speeds also create a less favorable environment for the chemical reactions involved in ozone pollution. Cities without adequate airflow can often experience a pollutant buildup.

Read our Air Quality Measurements Series blog here focusing on wind speed and direction for more information about the role that wind plays in air quality.

Various innovations related to traffic have been used to work to combat air pollution in urban areas where vehicle-related pollution tends to be high.

Decreasing private vehicle use is another intervention that has been implemented in many cities around the globe.

The city of Copenhagen introduced the Green Wave technology which coordinates traffic lights for cyclists, encouraging the use of cycling as a quick, efficient alternative to driving to work. The city also implemented certain safety standards, like a 3-second advance on green lights for cyclists compared to cars, dedicated cycle paths, and wider cycle tracks that allow individuals to chat while commuting to work.

In London, the Ultra-Low Emission Zone (ULEZ) limits the number and type of vehicles allowed in the city center and has been shown to reduce NO2 by 44%, PM2.5 by 27%, and carbon emissions by 6% in the zone. Data shows that there was a 38% reduction in the number of polluting and non-compliant vehicles in the zone.

The Breathe London network has been crucial to measuring the success of the ULEZ in London, as noted by London Mayor and Chair of C40 Cities Sadiq Khan in a recent press release.

“I have made clear my determination to clean up London’s filthy air, which is why I recently announced the expansion of the ULEZ London-wide, so five million more Londoners can breathe cleaner air. Monitoring air pollution is crucial to understanding the risk that toxic air has for us all. The Breathe London Network is playing an important role in empowering communities to measure air pollution in their local areas and campaign for action. Together, we can clean up our city’s air and build a better, greener, healthier London for everyone.”

Read our press release with Breathe London here for more information about our work to reduce air pollution in London.

Investing in renewable energy has also been part of the fight for a healthier environment, as it leads to fewer greenhouse gas and air pollutant emissions, benefiting both air quality and climate change. In New York, a recent $1.4 billion investment in renewable energy — including funding for both solar plants and wind farms — is expected to reduce carbon emissions by 1.6 million metric tons, or the equivalent of 340,000 fewer cars on the road.

By developing creative, innovative approaches to reducing air pollution — especially in urban areas that tend to suffer from poor air quality — we can work towards cleaner air for billions of people around the world.

It is essential that these approaches are used in conjunction with data from air quality monitoring networks to fully evaluate the effectiveness of any particular initiative.

Interested in measuring air quality to provide your stakeholders with cleaner air, improved physical and mental health, and a healthier climate? Get in touch with our team to learn more about our Sensing-as-a-Service solution for governments, businesses, and community organizations, using our scalable, affordable Node-S air sensors and Clarity Modules that do not depend on infrastructure like WiFi or power — making them especially resilient during environmental disasters.

What makes a measurable impact on air pollution? How low-cost air sensors are enabling a new paradigm of air quality policies and interventions

Dr. Sunni Ivey joined us for a conversation about her air quality and environmental justice research and her use of low-cost sensors to better understand human pollution exposure.